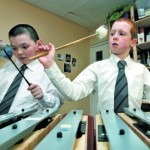 It fuses intricate classical music compositions and the simplistic iconography of a PlayStation. It allows the most unmusical people to play Beethoven in minutes. It has caused a revolution in how music is taught across Europe. And now it is making waves in Scottish schools.


Figurenotes is a new way to write and read musical notes. It swaps the complicated notion of crotchets, quavers and breves for a system of coloured symbols.

Developed in Finland in 1995, Figurenotes was originally designed to help young people with learning difficulties play music. But the founders of the scheme, Maarku Kaikkonen and Kaarlo Uusitalo, believe the majority of their book sales are to adults who want an easy way to learn how to play an instrument.

Drake Music Scotland, who are piloting the scheme in Scotland, believe it could follow a similar path here, moving from specialist schools into mainstream education and eventually into the hands of late-blooming Mozarts.

“I always come across adults who hanker after wanting to play the drums, piano or guitar, and this music notation system is ideal for someone to just slide in and really enjoy it,” said Rick Bamford from Drake Music Scotland, a charity dedicated to making music accessible to disabled people.

Already established in Finland, Estonia, Latvia, Italy and Japan, Scotland is the first English-speaking country to adopt the system. An 18-month project began last September with 160 children and four adults with learning difficulties involved in six local authorities: Edinburgh, East Ayrshire, Clackmannanshire, Inverclyde and Dumfries and Galloway. It is funded by the Scottish Arts Council and with nearly £70,000 of National Lottery funds.

Figurenotes’ concept is simple. Each octave is given a different symbol: cross, square, circle, triangle and diamond, similar to the symbols found on computer games controllers. Within each octave each note is given a different colour. Stickers for each note are placed on the keys of a piano or the fret board of a guitar. They correspond to the symbols written on a sheet. All the wannabe musician has to do is match up the notes on the instrument to the notes on the page.

A stepping stone process has also been developed to move pupils from reading music in Figurenotes to using traditional notation.

“It is not an alternative system – it contains the same information as conventional written music,” said Thursa Sanderson, Drake Music Scotland’s chief executive. “So someone who has just learned how to play using Figurenotes can sit and play in a group with someone reading normal music.”

She said it could potentially do for the teaching of music what phonics has done for literacy education.

Pupils from Lilybank special needs school in Inverclyde who have been using Figurenotes have been able to join the training orchestra in the local mainstream school, Port Glasgow High.

“Before they would not have been able to do this,” said Annona Thornton, the school’s music teacher, who rated Figurenotes as the best thing she has come across in 40 years of teaching. “It makes a difference to what they can cope with socially. It raises self-esteem and gives them the opportunity to play with other people.”

Drake Music Scotland is developing software to compose using Figurenotes. A conference is planned for October to gauge the pilot’s success.