Media
Six Songs of Me: Just why music matters so much to us…
February 13th, 2013
Tags: research 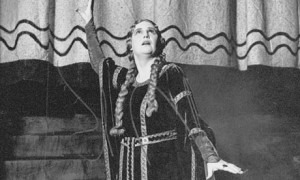 No human culture has been identified that does not have music, and for many people music is the source of some of the most powerful and significant experiences in their lives. In the 100 years or so since recorded music has been widely available, our lives have become suffused by it: we are born and die to music, we eat and shop and travel and make love to music, we work and play to music. Some of our most powerful memories are either of music, or are accompanied by music – and sometimes, even as listeners, we seem almost to become the music that we hear: “Music heard so deeply that it is not heard at all, but you are the music while the music lasts”, as TS Eliot wrote.

Philosophers have been puzzling for millennia over what it is about those organised but apparently meaningless sounds that we find so compelling, joined more recently by anthropologists, sociologists, psychologists and neuroscientists. It’s tempting to think that it might be something physical – something about the orderly patterns of vibrations – that gives music its compelling force, and right back to Pythagoras and the idea of a harmonic series, philosophers and scientists have chased this mathematical/acoustical explanation. But consider the vast sonic differences between the music of different cultures, or those within our own culture, and this soon seems pretty implausible. The idea that music might be some kind of universal language – attractive as it may seem when you see children and adults of all races and nationalities enjoying a concert in the park together – may run into difficulty when you try to get Gilbert and Sullivan fans to express any enthusiasm for dubstep, or jury members of the Chopin Piano Competition to rate the traditional beiguan music of Taiwan.

Rather than searching for the holy grail of a mathematical or acoustical explanation, it seems more fruitful – and actually much more interesting – to think about the rich and complex manner in which music is embedded into social functions. This happens in microsocial and macrosocial ways: music can make its appeal at the level of whole nations (national anthems at the Olympics remind us of that) and individuals. This isn’t to give up on the idea of some kind of psychological explanation for the extraordinary power and reach of music – quite the opposite: but it is a reminder that music’s psychological impact needs to be understood in relation to the constantly evolving cultural context within which we make, consume, contemplate, and are absorbed by music.

There’s been a lot of writing aimed at a broad audience on this fascinating and complex topic: Oliver Sacks’s Musicophilia, Philip Ball’s The Music Instinct, Dan Levitin’s This is your Brain on Music, Ruth Herbert’s Everyday Music Listening, and the book I co-wrote with Nicola Dibben and Stephanie Pitts, Music and Mind in Everyday Life. In admittedly different ways these books all grapple with what might be called the “level” problem: should we be looking at the brain, or at the structure of musical materials, or at the psychological processes of perception, cognition and emotion, or at music’s possible evolutionary origins, or at its everyday 21st-century social functions as the keys to understanding music’s power and impact on people’s lives?

The easy answer, perhaps, is just to say “all of them” – and in one sense that’s absolutely right. Since our brains and bodies are central to the experience of music, there must be a role for neuroscience; but since it’s also clear that the brain is dramatically shaped by the environment to which it is exposed, we’re going to need a detailed understanding of the structures and possibilities of that particular micro-environment that is music. And it would be neglectful at best, and possibly plain stupid, to ignore the wider body of research on the psychology of human emotions in trying to understand why music moves us, just as it would be wrongheaded and naïve to think that one could account for the popularity and influence of either Madonna’s or Mozart’s music without thinking very hard about social representation, market economics, and the impact of powerful institutions – like record companies or opera houses.

The critical matter is to find the appropriate approach for any specific question: I’m pretty convinced that the dramatic impact that music can have on the mobility of people suffering from Parkinson’s disease will be understood in terms of neuroscience and rhythm, and that the explanation will involve the activity of specific brain areas and their sensitivity to the regularity and predictability of external sources of information (like metrical rhythms). I don’t see that the sociologist Pierre Bourdieu’s influential theory of cultural capital, for example, has any obvious contribution to make there. But I’m equally convinced – contrary to some proponents of the so-called Mozart effect – that a satisfactory understanding of the impact and persisting fascination with Mozart’s music will not come from looking at patterns of notes in his music or areas of the human brain, and that it’s a phenomenon that demands a far more socially and historically informed approach – to which the idea of cultural capital might well have something to offer.

Perhaps one of the problems is a tendency to tackle these big questions in ways that are too general and abstract. One way to ground them is to look more closely and think more deeply about the music that matters most to each of us at a personal level, and the Guardian is launching a project called Six Songs of Me that helps to pose that question. Readers are invited to submit and share information about the music (and it may be songs or symphonies) in specific categories that has soundtracked their lives, and from this social experiment, some fascinating data should emerge that might help us to think more fruitfully about the “big questions” that lie behind the sounds of our lives.

What are some of the significant songs or pieces of music for me? The first music I remember was a collection of French children’s songs that we had at home on 45rpm vinyl records whose tunes and misheard words I used to sing with my sisters. “Ong kerrong kerrow kassay” was one of our favourites – mostly because it had the sound of breaking glass in it – and only much later did I realise that those nonsense words were actually “Encore un carreau cassé” (“Another broken window’ – hence the glass). Coming across those records again recently, I was struck by the beautiful orchestration and harmony of many of the arrangements – that I must have heard at the time, but to which I had never really listened. Those records were “family”, and the first music that I remember owning was a record of Hole in the Ground, recorded by Bernard Cribbins in 1962. Again it was the sound effects on the record (the drill and shovel sounds) that I remember being fascinated by …

The best live musical experience? There’s something very special about music that you’re involved in as a player, and as a teenage violin player, I was a member of the British Youth Symphony Orchestra for a performance of Mahler’s 5th Symphony. It was a transforming experience – and I remember years later seething with rage after a performance in the Festival Hall when the person sitting next to me spent what seemed like the whole performance flicking through the programme while I was trying to “be the music”, as Eliot put it. There’s something incredibly powerful about shared musical experiences with other people, and equally there’s something horribly distracting and undermining about hearing music with someone who seems to be deaf to what’s going on.

Music is much more than the sound, of course, and another live experience that is firmly lodged in my memory is seeing the German progressive rock group Can in about 1975 – not only for their amazing and unearthly music, but also for the sight of Holger Czukay coolly playing his bass in white gloves. Whatever their other virtues, Can were not a band that would fill the dancefloor, but a song from about the same time that reliably did, and which I loved to dance to, was Stevie Wonder’s Superstition – that loose mobility and combination of relaxation with completely coordinated precision that engages the body in an utterly compelling manner.

As for songs of love and death: well, I have to admit to a serious weakness for late Romantic harmony, so it’s hard to avoid the Liebestod from Wagner’s Tristan and Isolde. Two specific experiences connected with the Liebestod have stayed with me: the first was when the inspiring and eccentric French teacher at school (who told us about Chomsky, as well as être and avoir) invited a group of pupils to his house to listen, and talk about, “the erotic in music” – and played us Kirsten Flagstad singing the Liebestod on an old 78rpm disc, an event that I don’t think I really understood at the time, but which definitely left its mark. Then in the 1980s going to the Coliseum in London to a production of Tristan and Isolde conducted by Reginald Goodall at which I was so engrossed that I recall wishing that there weren’t any intervals.

Definitely not music that you’d want at a funeral, though, where collective and participatory music is the most powerful, and the most helpful. As a secular humanist, I’d paradoxically be very happy with any one of a number of bittersweet hymns. Their power, for me, comes from having sung them at school, where they drew me in musically and emotionally – despite myself.

So what do the soundtracks to my life tell me about either music or myself? Well, they bring home that strange combination of serendipity and revelation that so often characterises our encounters with music: those BBC advertisements for the proms in which a passerby steps into an invisible circle of sound and is suddenly transfixed and transported tap into a particular preoccupation with “the secret power of music” which is both profoundly ideological and all too real.

There’s nothing secret about music’s power in our lives, even if we are still a long way from having a proper understanding of it, but there is something astonishing and transformative about music’s grip on consciousness – and the sheer variety of musics, from every age and every part of the globe that can do that. And perhaps our early experiences of music leave a mark that we only understand much later: at the age of 50 I wrote a book called Ways of Listening whose central premise was the continuity between music and the sounds of the everyday environment. Perhaps it’s all down to the influence of those sound effects on the first records that I heard…