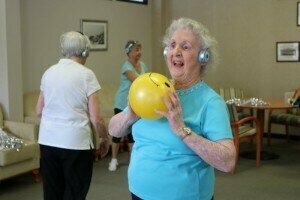 Props are also brought in to bring the disco to life.

A silent disco usually invokes images of twenty-somethings raving to hard-core techno at a festival, but now dementia patients are donning the headphones to great success.

In a world first, silent discos are being used as dementia therapy in New South Wales and sufferers are reaping huge mental benefits.

With the sounds of The Andrews Sisters, Dean Martin, Elvis and occasionally a bit of Taylor Swift coming through their Bluetooth headsets, patients are transported through music and movement. Full story.