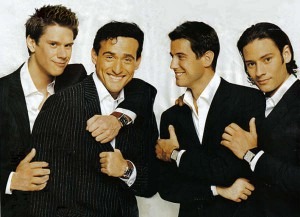 The Il Divo singers were live, but the orchestra was relegated to the role of visual window dressing.

According to sources, the musicians were informed at the beginning of a three-hour rehearsal in the afternoon that another orchestra’s audio tracks would be heard by the audience. The tracks included instruments that were not present on stage, such as a synthesized bass guitar.

Melissa Sanders, the ASO’s senior director of communications, confirmed late Monday that the ASO management on site at Verizon also didn’t find out until the rehearsal that while the orchestra would perform the music live, the audience would hear the prerecorded orchestra. Sanders said the ASO played live during the entire performance with live microphones hanging overhead.

Nevertheless, the ASO was not in the mix piped to the audience through the sound system. The decision to use the prerecorded music was made entirely by the Il Divo tour, not by anyone from the ASO.

According to sources, as the Il Divo conductor announced to the ASO musicians that they would go unheard, he explained that this was the first show Il Divo had worked with a major symphony orchestra. He said that, because so many of the local orchestras they use aren’t skilled enough to read or play the music for Il Divo, the company had prerecorded the orchestral parts to ensure consistent quality.

Those audio tracks are loaded onto a computer wired into the sound system, and a special program plays the recorded parts in the appropriate places. It’s a practice that’s widely accepted in television production, and in pop and country music, but it’s rare to have an orchestra on hand as a musical prop.

For those who missed the bus and don’t already know, Il Divo is the operatic crossover vocal quartet created in 2004 by “American Idol” fixture Simon Cowell. In many ways, the four male singers are meant to emulate the success of the Three Tenors, supplemented by a conspicuous “beefcake” factor: French pop singer Sébastien Izambard (some think intended by Cowell to be an avatar of himself), Spanish baritone Carlos Marín, American tenor David Miller and Swiss tenor Urs Bühler. Il Divo has sold more than 26 million records worldwide and has hordes of mostly female fans.

Without question, the 5,000 or so people at Verizon Amphitheatre on Sunday were there to see and hear, perhaps in that order, the men of Il Divo, not the small contingent of ASO musicians as a backup band. One cannot blame the musicians, however, who felt disrespected. After all, the ASO’s own recordings have earned 27 Grammy Awards and the ASO was part of the bill.

It was the first time the ASO has ever served as an “air orchestra” synced to a recording by another orchestra. Its outdoor performances at the 1996 Summer Olympics in Atlanta were prerecorded and that audio was used for the television broadcasts. But those recordings were of the ASO itself, not another group.