Media
Could You Shorten That Aria? Opera Weighs Cuts in the Classics
December 9th, 2016
Tags: opera 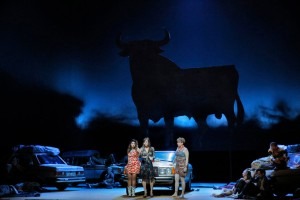 For some opera fans, the most startling thing about Calixto Bieito’s production of Bizet’s “Carmen” here last month was not the soldier clad only in his tighty-whities and combat boots, or the nude matador. It was the way a series of cuts had whittled roughly half an hour off the opera, which wound up taking less than two hours and 50 minutes, including just one intermission, to propel its heroine to her bloody end.

The streamlined “Carmen” here is part of a broader debate within opera. After several decades in which the trend has been toward longer, uncut operas — drawing on the work of scholars to restore rarely performed passages, and putting a renewed emphasis on completeness that would be alien in, say, Shakespearean performance, where cuts are routine — some impresarios and directors think it is time for the pendulum to swing back a bit. Full story.