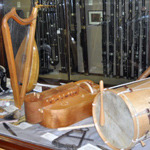 Musicologists in Oxford have made exact replicas of instruments featured in the The Garden of Earthly Delights by Hieronymus Bosch. And, apparently, they sound ‘horrible’.


Are you familiar with the musical intruments that appear in Hieronymus Bosch’s painting The Garden of Earthly Delights? The 16th-century work, hanging in the Prado in Madrid, features a harp with its base thrust violently through a lute. There’s also a naked figure, performing a sort of swan dive across the harp’s strings. It’s like watching a gig by the late-medieval equivalent of the Who.

A team of musicologists, craftsmen and academics from the Bate Collection in Oxford have laboured for months to make exact replicas of the painting’s instruments. And now they are struggling to conceal their disappointment at the results. They had hoped to have a good old sing-song, but the instruments, according to the museum’s manager Andy Lamb, sound “horrible”. Only two of the 10 – a flute and a drum – turned out to be playable. The others were “either impossible to make or painful to hear”.

Of the Boschian hurdy-gurdy, Lamb says: “The design seems to be fundamentally flawed. When you turn the handle, you get a half-hearted buzzing noise, but you can’t get any melodies out of it. It would be difficult to hold because its strings are in the wrong position – and there is even a superfluous string.” The trumpet, he adds, doesn’t have a harmonic series, the harp won’t make an octave, the lute collapses if you tune it, the shawm is “strangely proportioned” – and the bagpipes, apparently, are a complete disaster.

Hmm, you do find yourself thinking, as you look again at that fantastical masterpiece The Garden of Earthly Delights (you can see all three parts of the triptych on the Prado website). I’m sorry for these guys and all, in the failure of their, like, totally heroic attempt to take these underappreciated objects and bring them to 3D life. But, you know, looking back on it, was there anything elsewhere in Bosch’s triptych that might have given them some indication that its subjects weren’t exactly drawn from life? Was there some little clue lurking? Something like the giant blue bird-monster wearing a cooking pot as a hat – and chewing the head off a man with a flock of pigeons flying out of his bum? Maybe that, perhaps? Or the mermaids? Could the mermaids have tipped them off? Or the gigantic pair of cauliflower ears with a huge knife sticking out of them? Or the . . . well, I won’t go on.

The team remain, in any case, brilliantly unrepentant. Lamb, when asked if this project was a complete waste of time, said: “It was worth it. We are pushing the boundaries of music education forward an inch at a time.” As if to prove it, he adds, with the authority of one who knows, the following apercu: that, whatever Bosch’s painting depicts, it’s not possible to play a flute with your bottom.

This project was so mad, it takes on its own magnificent kind of glory. If they want to bulk out their orchestra, Braque has a couple of violins they can add. It’s the equivalent of someone recreating the surreal and sinister bits of childbirth equipment from the credits sequence of Dead Ringers and using them to deliver a real child; or painstakingly recreating Salvador Dalí’s melting clocks only to find – doh! – that the hands don’t go round properly.

I’m glad they did it, though. I’m truly happy that these objects now exist in the world, if only because they point the way for other similarly bonkers-but-brilliant projects. And why stop at instruments? How many budding Dr Frankensteins are there out there, having assembled a human being according to Arcimboldo’s famous paintings of human heads, composed of fruit, flowers, vegetables and fish? Even as you read this, a man may be tenderly lifting his creation’s pea-pod eyelid and searching in vain for the spark of life, before leaning into its left onion-ear and bellowing: “Live! Damn you, LIVE!”

These Oxford academics are on the harmless end of the scale. Mark my words, when the bio-engineers decide to get stuck into Bosch, à la The Island of Dr Moreau, none of us will be laughing.