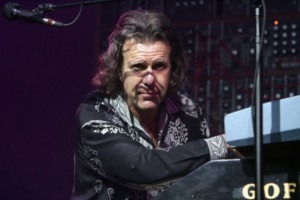 THREE years ago, violinist Christopher George quit his position as leader of the Scottish Chamber Orchestra. At the time, minimal fuss was made of his departure, other than talk of some sort of problem with his playing. In fact, so little was said in the way of explanation that the issue passed by almost unnoticed.

Out of the blue, a few weeks ago, he called telling me that he had a story to tell about a disease that affects musicians in particular, and which forced him to bow out of front-line violin playing; also that he has used the time since to study conducting, which he will put into practice tomorrow night at Greyfriars Kirk, when he directs the specially-formed Playfair Orchestra in a fund-raising concert in aid of the Euan MacDonald Centre for Motor Neurone Disease Research at Edinburgh University.

What actually happened to George was the onset of a different neurological disease that is increasingly becoming the musician’s nightmare – a condition known as focal dystonia, for which diagnosis is in its infancy, understanding is minimal, and anything in the way of a cure has still to be found.

He first noticed a problem shortly after joining the SCO in 2006. “It began with a cramping of my weakest finger, the fourth one for a violinist,” he recalls “I started not using that finger and finding alternative fingerings that would cover over the problem. But then it moved into the next finger, which led to horrifically scary moments.

“We were doing a Prom in London that included Stravinsky’s Pulcinella and which was live on telly. I had all these difficult solos to play using weird fingerings I had worked out. While all this stuff was going I was thinking to myself, ‘This is awful.’ It became very clear to me then that this was not something I could ignore any more.”

George made an instant decision to find out exactly what was going wrong, bravely quitting a job that had been the pinnacle of his aspirations.

He consulted one of the few experts around, Eckart Altenmüller of the Institute of Music and Physiology and Musicians’ Medicine in Hannover, who made the critical diagnosis. “I had been in denial for a while and putting it all down to tension problems. But inside you’re panicking that you’ve got a major problem like multiple sclerosis. In that sense, diagnosis was a relief.”

George’s reluctance to seek help had also stemmed from the gradual onset of his own symptoms. “For others it can happen suddenly. But the strangest thing about focal dystonia is how task specific it is. You can move away from the instrument and your hand works perfectly, but when you have to perform a particular function at a particular moment, the neurology starts panicking somehow and sends contradictory messages – a kind of fight or flight thing.

“The brain goes into manic mode and sends as many messages as possible, but they contradict each other, so there’s overload and the strongest impulse wins, which is the clenching of the fist. So even though you’re telling your finger to lift off the string, it does the opposite.

George soon discovered how common the condition was among musicians, affecting flautists in the same way (there are one or two currently playing in Scottish professional orchestras who have had to relearn techniques), but equally affecting the lips of wind and brass players.

Altenmüller has even published an academic paper arguing that Robert Schumann – famous for inventing a ruinous finger-stretching device in 1832 – did so to counter “a task specific loss of voluntary control of the middle finger in the right hand” that effectively brought his piano playing career to a halt.

He writes: “Risk factors for developing musician’s dystonia are male gender, extensive cumulative practice time, extreme motor workload concerning the temporal and spatial quality of the affected movements and personality traits such as proneness to anxiety and perfectionism. All these factors can be demonstrated in Robert Schumann’s early life.”

George, with financial assistance from the Musicians Benevolent Fund, secured a place on the conducting course at the Royal Conservatoire of Scotland, and has found that experience enormously therapeutic, not least in allowing him to put his violin playing problems to the back of his mind. But is that also a sign that a new career is on the horizon?

“I’m feeling my way forward,” he says. “Having done a lot of directing with the SCO, and a lot of chamber music where the psychology is how and when to say things that influence the performance; that to me is endlessly fascinating. But I don’t know yet. I’m very happy to aim towards being a conductor, but at the same time I don’t really want to impose pressure on myself by aiming at a big career. I just like being involved in music.”

As such, George has busied himself in educational work, coaching the National Youth Orchestras of Scotland and of Great Britain. And he’s even played the violin a bit. “I still do the odd tour with the Academy of St Martins-in-the-Field. But my playing is not what it was. They’re very understanding and let me sit at the back.”

Tomorrow, though, George is back up front where he belongs, conducting an orchestra consisting of some of his old colleagues from the SCO and “old mates” from the Halle Orchestra and Royal Liverpool Philharmonic, as well as amateur players that include his sister and father. The repertoire is an equally relaxed affair – Beethoven’s Symphony No 7 and Haydn’s Cello Concerto in C. All will be wishing him well.