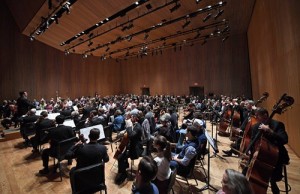 The audience joins Park Avenue Chamber Symphony musicians on stage during InsideOut at the DiMenna Center in New York on October 28.
Photo: AFP

The challenge haunts classical music: How do orchestras rejuvenate aging audiences? Pondering the question, conductor David Bernard asked something related – how did he himself become enthralled by the music?

His answer – it was when he first sat inside an orchestra. And so, he wondered, why not bring that experience to everyone?

Bernard, who leads the Park Avenue Chamber Symphony in New York, has launched a bid to re-envision the traditional orchestra by bringing the audience directly onto stage. Adding dozens of chairs, the orchestra lets ticket-holders sit among the musicians, following underneath Bernard’s baton instead of staring at his back. Full story.