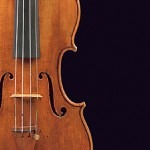 It may be the wood, the glue or the shape — but experts have long suspected that the real secret of the cherished Stradivarius violin’s special sound lay in its gleaming varnish.

Now, after years picking apart scraps of lacquer taken from Stradivarius
instruments, French and German scientists say they have debunked one of the key theories for the fiddles’ supreme, bright sound.

Experts have long argued that the special Stradivarius sound could be due to particular qualities in the wood, glue, or even a mineral solution used to kill woodworm, as well as suspecting unidentified elements in the lacquer.

But now Jean-Philippe Echard, a chemical engineer at Paris’s Museum of Music which took part in the four-year study, says: “There is no indication that allows us to say that the lacquer has an influence on the sound.

“All kinds of ingredients have been debated,” he added.

“There’s been talk of fossil amber or propolis which is produced by bees. But we haven’t found any of these ingredients, which may have given the impression of something mysterious or rare.”

Far from being a magic ingredient to make the instruments sing, the resin was more likely used to give them a rich colour.

The study was carried out on lacquer from five instruments — four violins and an old-fashioned “viola d’amore” — made over a 30-year period by master luthier Stradivari, who lived from 1644 to 1737.

Just a few hundred of his creations still survive.

The chemists scrutinised the samples under infrared light, identifying the two layers of varnish applied by the creator and their chemical composition.

“We have found that Stradivari employed common and easily available components that were commonly used among craftsmen and artists in the 18th century,” the researchers wrote in their study.

“He sought a variety of tints for his instruments, which are still highly praised for their beautiful appearance,” the researchers wrote in their report, published by the top chemists’ journal Angewandte Chemie.

“He might not have possessed an unusual or ‘secret’ ingredient, but he was an outstandingly skilled craftsman who had mastered the art of violin making, and in particular wood finishing.”

Stradivari’s “recipe” for varnish was “almost magical in its simplicity,” said Stephane Vaiedelich, head of the museum’s restoration laboratory.

“I think that instrument makers will look closely at these results and experiment with them, use them and bring this kind of method back to life. At least we hope so.”