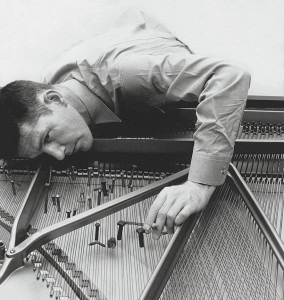 On August 29, 1952, David Tudor walked onto the stage of the Maverick Concert Hall, near Woodstock, New York, sat down at the piano, and, for four and a half minutes, made no sound. He was performing “4’33″,’’ a conceptual work by John Cage. It has been called the “silent piece,” but its purpose is to make people listen. “There’s no such thing as silence,” Cage said, recalling the première. “You could hear the wind stirring outside during the first movement. During the second, raindrops began pattering the roof, and during the third people themselves made all kinds of interesting sounds as they talked or walked out.” Full story.