Media
Scientists created a three-armed cyborg to play the drums like no human can
May 4th, 2016
Tags: instruments 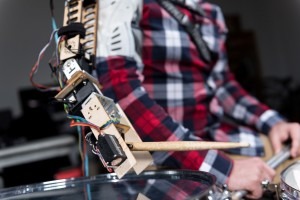 Georgia Tech researchers have built a robotic arm that attaches to a drummer’s shoulder and plays along. This allows drummers — now equipped with three arms — to play sequences that two-armed humans can’t even attempt.

“It’s a richer and more sophisticated rhythm because you can hit one more thing,” said Gil Weinberg, director of the Center for Music Technology at Georgia Tech. The robotic arm is capable of hitting a drum up to 20 times per second, a rate that’s impossible for humans. And it never needs a break. Full story.