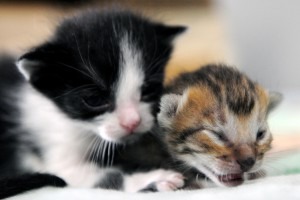 “Cats are not humans and humans are not cats and it is important that we humans, as the servants of cats, be aware of this difference.”

That’s Dr. Charles Snowdon, a psychologist at the University of Wisconsin-Madison. He’s been on a quirky mission to–yes, you’re reading this right–create music for cats.

You can listen to some of his “meow-sic” here.

“We were motivated to make music for cats for two reasons,” he told The Huffington Post in an email. “First, many pet owners told us that they play radio music for their pets while they are at work and we wondered if this had any value. Second, we have developed a theory that suggests that species other than humans can enjoy music but that the music has to be in the frequency range that the species uses to communicate and with tempos that they would normally use.”

To create the cat music, Snowdon and his colleagues tried to mimic natural cat sounds, using sliding notes and high pitches–cat calls tend to be an octave or more above human voices. The researchers based the tempo of the songs on purring and suckling sounds.

Then came the moment of truth: the researchers tested their compositions on 47 male and female domestic cats in their homes. The kitties heard “Cozmo’s Air” and “Rusty’s Ballad,” along with two human music pieces for comparison: Gabriel Fauré’s “Elegie” and Johann Sebastian Bach’s “Air on a G String.”

What happened? When the cat music was playing, the felines were significantly more likely to orient their heads toward it, walk toward it, and even rub up against the speaker.

“We interpret this as indicating that the cats showed a preference,” Snowdon said in the email.

Now that the researchers have found music cats seem to like, they think it may have some important applications, like soothing stressed-out shelter cats.

“We think of cats as highly independent of their human servants, but there is some research showing that cats experience separation anxiety, which is greater in human-raised cats than in feral cats,” he told Discovery News.

An article describing the research has been accepted for publication in the journal Applied Animal Behavioral Science.