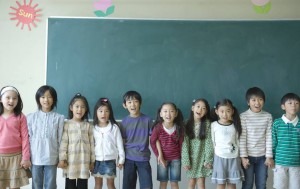 Forget the middle school haters who shamed you into believing you were tone-deaf. A new study reveals that singing is more like playing an instrument than previously thought: Singing accurately is a skill that can be taught and developed. And that means that even the worst singers among us should just keep singing.

“No one expects a beginner on violin to sound good right away; it takes practice, but everyone is supposed to be able to sing,” Steven Demorest, the lead researcher behind the study, told Northwestern University. “When people are unsuccessful, they take it very personally. But we think if you sing more, you’ll get better.”

The study: Using three age groups — kindergarteners, sixth graders and college-aged adults — researchers asked each person to listen to a pitch and then sing it back. Researchers noticed a significant increase in accuracy from kindergarteners to sixth graders, likely because most kids that age have regular musical training at school.

Surprisingly, the adults performed at a level closer to the kindergarteners than the sixth graders; researchers now think that’s because singing has a “use it or lose it” quality to it. It’s like a muscle. And all that off-pitch singing only helps strengthen it.

“It’s a skill that can be taught and developed, and much of it has to do with using the voice regularly,” Demorest explained to Northwestern. “Our study suggests that adults who may have performed better as children lost the ability when they stopped singing.”

Just keep singing: According to the study, only 34% of kids in the U.S. past the eighth grade choose to participate in music classes of any kind; that percentage decreases as kids near high school graduation. Those dire statistics, combined with anecdotal evidence that many kids stop singing when they’re told they’re simply “tone deaf,” have convinced researchers that kids are dropping out of music education because they’ve been shamed into believing they’re simply no good.

In short, singing — no matter how bad — is a good thing. In fact, it might just make you better. Don’t let the haters keep you down.