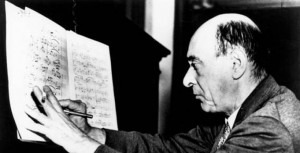 “Whenever Schoenberg wanted to say something he would raise his finger and everybody would fall silent and then he would have his say,” said Greissle-Schoenberg, whose childhood memories include watching his grandfather holding court with other musical luminaries.

The 88-year-old grandson of the famous 20th-century composer remembers a side of Schoenberg that most people didn’t get to see: the family man. These elements of Schoenberg’s life are portrayed in a collection of letters, compositions and photographs that Greissle-Schoenberg donated to the University of North Texas’ Music Library.

“There are incredible pieces of history here,” said Arturo Ortega, a coordinator for the Music Library, one of the nation’s largest academic music collections. “A lot of it is Schoenberg the family man, Schoenberg the father, Schoenberg the grandfather, about which we know relatively little in comparison to Schoenberg the composer and the innovator of musical thought. This makes it terribly interesting to see him within the context of family.”

The Jewish composer — known for inventing the 12-tone technique — was born in Vienna and worked throughout Europe before fleeing to the U.S. in 1933 as Adolf Hitler came to power. Schoenberg went on to teach at the University of Southern California and the University of California at Los Angeles before he died in 1951 at age 76, leaving behind a legacy documented in the archives of various institutions.

Though the largest collection of Schoenberg’s archives resides at the Arnold Schoenberg Center in Vienna, Greissle-Schoenberg decided the 100 or so items he owned should go to North Texas after visiting the Schoenberg collection that has been housed at the Music Library since the late 1960s. It contains letters between Schoenberg and his cousin, Hans Nachod, and music manuscripts written in Schoenberg’s hand.

Greissle-Schoenberg, who lives in New York City, said that the hardest items to part with were scores written by his grandfather and edited by his father Felix Greissle, a Schoenberg student who married the composer’s eldest daughter and worked in the music-publishing industry.

Also included in the donations are letters Schoenberg wrote to family members detailing his 12-tone technique and a list of instructions Schoenberg sent to Greissle regarding a piano score Greissle was creating for Schoenberg’s violin concerto. There are also corrections Schoenberg made to that concerto that didn’t make it to print.

One photo in the collection shows Greissle-Schoenberg as a baby, his grandfather smiling down on him.

Cole Freeman, a North Texas master’s student in musicology who organized the artifacts, said Schoenberg comes across as a “stern but also compassionate patriarch.”

Therese Muxeneder, head of the archives at the Vienna center, called Schoenberg the most influential composer of the 20th century. She said that while the center would have been happy to acquire the items from Greissle-Schoenberg, she is pleased they have been sent to an institution where they are accessible.

The Vienna center dedicated to him includes everything from compositions to photographs to a replica of his study in Los Angeles.

“He was a radical composer. He really pushed the envelope further than anyone had as a composer,” Ortega said.

“It really opened up a whole new vehicle for creative thought and musical expression to use dissonance in a whole new manner.”

In honor of Greissle-Schoenberg’s collection coming to North Texas, a cantata called “Mein Lebenslauf” by Schoenberg’s son Georg, a musician and composer himself, was performed on campus last month. In the piece, Georg tells of living through World War II in Austria and what happened after.

“The chorus asks the soloist, who is supposed to be the voice of Georg, `And what did you do after the war?’ He replies, `What was I to do? Just attempt to survive as best I could,'” Ortega said.

Georg worked odd jobs after the war, including as a produce delivery man, before his death in 1974.

The latest Schoenberg items are expected to be available to researchers online this month.