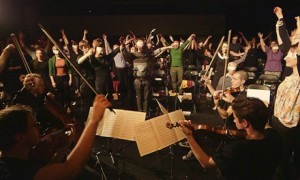 Devised for a society in search of hyperstimulation, BitterSuite symphonies allow you to remain powerfully in the moment by teasing your senses in time with the music

What does Debussy smell like? It might not be something you’ve had cause to wonder, but it was the burning question when I took my seat to hear the composer’s String Quartet in G minor on Saturday. On my seat was a small black box that said “Open Me”, and inside the lid another message: “Smell Me”. Just sitting and listening to music is so 2013. This was to be a completely multi-sensory experience.

We’ve had immersive theatre, now here’s the immersive concert experience, the latest attempt to stir concert-goers out of their stupor and reignite classical music for new audiences. BitterSuite is a project run by 24-year-old producer Stephanie Singer, and it’s inspired by synaesthesia, the neurological condition that leads to a confusion of the senses. This is a concert where you don’t just listen to the music – you taste it, smell it and feel it as well.

In a pilot performance at the Rich Mix arts centre in east London, while the Phaedrus Ensemble got stuck in to Debussy, the audience were blindfolded and fed different sensory experiences in parallel with the music: fizzy pop and cola bottles for the effervescent second movement and fingers scampering up your arms in tandem with the first violin, then as the music changed, a scent-soaked silk scarf flickering across your skin, and hands laid on to give a sensation of pressure or relaxation.

It’s a thoroughly entertaining experience. There’s the novelty (or apprehension) of wondering what’s going to be put in your mouth next, the matching up of sounds and smells, the way you feel rhythm tapped on your skin as well as hearing it. But the main effect is of being completely present in the moment. There is no dozing off, zoning out or mentally writing your shopping list. This is active listening.

For Singer, a music-lover who nevertheless says she endured many “boring” concerts when she was growing up, it’s about bringing the music to life and changing the way we listen. She’s been running music workshops employing similar sensory techniques at a pupil referral unit in London and is particularly enthusiastic about engaging young people with classical music.

She’d like this to be just the start, and has lots more ideas brewing. Another BitterSuite experiment involved being fed music through headphones while being led blindfolded into a flower-filled den, inhaling arias and lilies in the same breath. A previous project, as part of the Chelmsford Sensation festival, had the audience listening to the shimmeringly eerie vocals of Ligeti’s Lux Aeterna in a room with the heat cranked up while ice cubes were run along their skin. Actual shivers down the spine guaranteed.

You could protest that the music should be able to produce these effects without the help of additional props, but BitterSuite isn’t the first musical project that’s tried to up the levels of sensory stimulation in one way or another. At a performance of Stockhausen’s Klang last summer at the Roundhouse, listeners were given coloured glasses to bathe each movement in a different hue, and could order specially devised canapes and cocktails matched to the music (because who doesn’t like a saffron mousse cake to go with their German avant-gardism?). Even the new year fireworks over the Thames this year had smells to go with the whizz-bangs. We’re a society in search of hyperstimulation.

But this synaesthetic concert experience isn’t about distraction or feeding short attention spans – it’s about concentration. Unlike immersive theatre, where the often perambulatory nature of the experience means you can spend the whole evening tripping round a darkened warehouse desperately in search of a story, this one focuses you right in on the matter at hand: the music.

And as for what Debussy smells like, I’d say a definite whiff of Parma Violets.