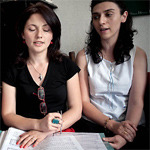 
It’s a familiar scene in Georgia, a Caucasus country where haunting three-voice chants reverberate through incense-heavy air in ancient churches packed with the faithful. Nationalist pride and the increasing strength of the Georgian Orthodox Church are intertwined with a revival of its ancient polyphonic sacred music, repressed during the Soviet regime.

At the Mostly Mozart Festival on Friday and next Saturday the Ensemble Basiani, a Georgian choir founded in 2000 and affiliated with the Georgian Patriarchate, will sing sacred and folk songs as part of the pianist Pierre-Laurent Aimard’s Bach and Polyphonies series. The ensemble will appear in programs that also feature Ars Nova Copenhagen and members of the Chamber Orchestra of Europe.

Stravinsky, a contrapuntal master himself, spoke of his fascination with Georgian singing, whose rich polyphonic tradition dates to the pagan era. Georgia became Christian in the early fourth century (six centuries before Russia), and the Georgian Orthodox Church became independent in the fifth century. The chanting that accompanies its liturgy evolved from Palestinian and Byzantine traditions, but from early on, it was sung in Georgian.

Byzantine chant and descendants like Gregorian chant and Russian znamenny chant are traditionally monophonic. But three-voice liturgical singing had been established by the 10th century in Georgia, according to Rusudan Tsurtsumia, head of the International Research Center for Traditional Polyphony at the Tbilisi State Conservatory.

Georgia is a patriarchal and socially conservative society, but the infrequency of mixed-gender choirs reflects the music’s close harmonies rather than any social dictum. There is an approximately one-and-a-half octave range between voice parts in traditional Georgian music, whereas in Western classical music there could be a three-and-a-half octave range.

In the 1500s the Council of Trent of the Roman Catholic Church fretted that polyphonic singing might distract congregants, but there was never any such debate in Georgia, Ms. Tsurtsumia said. With centuries of internal strife, occupations and invasions by the Mongols, Turks, Persians and Russians (among others), she added, Georgian culture faced far greater obstacles than a few bickering bishops. During the Soviet era, many churches and monasteries were closed, and the chant tradition was suppressed.

“Other countries have allies to protect them,” said Luarsab Togonidze, a historian who has sung with the Ensemble Basiani, but “Georgians are orphans.” He added, “This land is a crossroads and dangerous. Why did Georgians never leave this land and move somewhere safer? There is something magic here.”

It must be a rare visitor to Georgia who isn’t captivated by the stunning scenery, food and music. The small country — ecologically diverse and bordering Turkey, Armenia, Azerbaijan, Russia and the Black Sea — is rich in relics of defenders and conquerors. Farmers scythe hay in the shadow of crumbling 10th-century fortresses and ghostly factories. Churches and monasteries dot the landscape in impossibly beautiful settings, like the medieval Gergeti Trinity Church, an architectural gem nestled in fields of wildflowers.

But the country’s shaky infrastructure, while being modernized, is perhaps symbolized by Tbilisi’s beautiful Old Town, where balconies crumbling from neglect and a 2002 earthquake jut precariously over the narrow streets.

Since 1991, when Georgia declared independence from the Soviet Union (Russia and Georgia were engaged in a conflict in 2008), there has been a major effort to preserve its musical heritage. During a rehearsal in a room decorated with fading photos of Georgian bishops, Nino Naneishvili, 26, director of the female Ialoni choir, said that young people are increasingly discovering the chants by attending church. Sacred music, she added, is an integral part of Georgian identity. Zaal Tsereteli, a founding member of the Anchiskhati Choir, an important ensemble in the post-Soviet cultural revival, said he often hears of people inspired to join choirs after encountering the music in church.

But the manner of learning both sacred and folk music has significantly changed. John A. Graham, an ethnomusicologist, tour guide and Princeton Ph.D. candidate, who is writing his dissertation on the transcription and transmission of Orthodox liturgical chant, said Georgian folk and sacred music was primarily an oral tradition until the late 19th century. But the heritage was already under threat by then, since Georgia had been annexed by Russia in 1801, and its language and chanting were suppressed.

Traditional music also suffered from urbanization and changing social patterns, as young people left the country to study Western classical music. Master chanters (who memorized all three voice parts for thousands of chants for the complex liturgical calendar) and village song masters began to die without having trained successors. So a group of intellectuals, led by the statesman Ilia Chavchavadze, began a nationalist movement to preserve Georgian culture, publishing an important collection of folk music in the late 19th century.

Thousands of sacred chants were also transcribed into Western notation in the late-19th and early-20th centuries, although preservationists had difficulty deciphering the pneumatic notation of ancient manuscripts: often just a few squiggles or symbols to elaborate on a melody that it was assumed the singer already knew. Modality and untempered tuning, which result in the striking dissonances and harmonies of Georgian traditional singing, are ill suited for Western five-line notation. Improvisation, also a vital skill until the mid-19th century in Western classical music, is an integral element of both folk and sacred music in Georgia and further complicates transcription.

There are reverberations of the late-19th-century nationalist rhetoric today in Georgia, Mr. Graham said. But that early revivalist movement was quashed when, after a fleeting independence, Georgia became part of the Soviet empire in 1921. Georgia’s polyphonic folk tradition fared better than sacred music during that period, but the Soviets professionalized folk music and encouraged arrangements for large choirs, often at the expense of authenticity.

The debate over period practice in Western classical music also exists in Georgia. The Ensemble Basiani improvises and tunes its songs in traditional ways, replicating the performance styles heard on old recordings. As the choir of the Patriarchate in the imposing new Holy Trinity Cathedral in Tbilisi, however, the choristers sing in a more Westernized classical style.

The ensemble’s Mostly Mozart programs include folk music from eastern Georgia, in which two melismatic voices sing over a moving drone bass, and complex contrapuntal works from Guria, in western Georgia. There are songs for work, weddings, births, funerals, healing, drinking and feasts. “A Georgian is born and buried with a song,” as one 20th-century scholar put it.

The unexpected modulations and primeval yodeling of the earthy Gurian songs are startling. During a recent rehearsal in Tbilisi, the Ensemble Basiani practiced a traditional Gurian piece, a wild, multilayered, partially improvised song during which one singer yodeled with enthusiastic abandon. Afterward a choir member asked a listener, “Do you have a headache yet?” The Swiss-French composer Arthur Honegger, who died in 1955, is said to have failed in his attempt to notate a complex Gurian song.

In addition to the concert stage, a visitor to Georgia is most likely to hear folk songs at a supra, a multicourse feast with locally produced wine and Georgian delicacies like khinkali (dumplings) and shashlik. A tamada (toastmaster) encourages heartfelt toasts to women, wine, friendship and the motherland. During a recent supra in Signaghi, a hilltop fortress town with sweeping views of the Caucasus mountains, visitors on tour with Mr. Graham were serenaded by the Zedashe ensemble, which sang songs with harmonies as pungent as the local cheeses.

“A Georgian gathering without singing is impossible to imagine,” said Mr. Togonidze, the historian. “The Communists tried to change this, but they didn’t succeed. You can’t imagine Georgia without our songs.”

Ekaterine Diasamidze, an ethnomusicologist, singer and host at Radio Muza, Tbilisi’s classical music station, said folk and sacred songs “are like pearls for us, like diamonds”: “You don’t touch this diamond unless you have something better to replace it with.”

“Tradition and religion are very connected in Georgia,” she added. “Orthodox Christianity is an essential part of being Georgian. Georgianness, Christianity and chant are all connected.”

Many Georgian scholars, beginning with the philosopher Ioane Petritsi in the 11th century, have likened the three voices of Georgian polyphony to the Holy Trinity.

“One incredible quality of Georgian polyphony is that you need a third voice,” said Mr. Togonidze, reflecting on his country’s turbulent past. “Unity is essential. That’s how Georgia survived.”