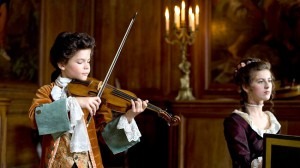 David Moreau and Marie Feret in a scene from Mozart's Sister
Source: Supplied

WITH the exquisitely beautiful Mozart’s Sister, French director Rene Feret has created the most appealing film about musical genius since — well, perhaps since Milos Forman’s Amadeus, which was about Mozart.

Obviously a labour of love, and also a family affair since two of his daughters play leading roles, this inside story about the lives of the itinerant Mozart family as they travel around Europe in the 1760s entertaining the crowned heads is both a touching personal drama and an insight into the importance of music to the nobility.

Leopold Mozart (Marc Barbe) is presented as a sort of 18th-century entrepreneur with a genius child he is not only willing to exploit but to push to the limits of his talent and beyond. Young Wolfgang (David Moreau) is already an experienced composer and violinist in 1763.

The focus of the film, though — as the title indicates — is on Wolfgang’s older sister, Nannerl (Marie Feret), who is just as talented as her brother but who has the misfortune to be a girl in her early teens.

As far as Leopold is concerned, girls should not play the violin (though Nannerl’s playing of the instrument is exquisite) and certainly should not compose music; this is beyond the capacities of the feeble brains of the female. These restrictions are, of course, for the girl’s own good, her father tells her, but she chafes against them all the same.

Despite this, the Mozarts seem to be a close, affectionate family though entirely dominated by Leopold, whose wife, Anna-Maria (Delphine Chuillot), takes a back seat.

The writer-director also makes clear that travelling across Europe was no joy in the 18th century, even for the relatively well-to-do. Journeying from country to country, court to court, by coach was cramped and uncomfortable, tedious beyond belief.

Also, things could go wrong, and a broken axle sidelines the family in rural France on their way to the Versailles court. But, according to Feret’s screenplay, this mishap results in a fateful encounter that will change the life of Nannerl, at least in the short term.

While repairs are being undertaken, the family finds accommodation in an abbey to which the daughters of the king have been exiled on orders of the powerful cardinal. Louise (Lisa Feret) strikes up an instant friendship with Nannerl and asks her to deliver a letter to the young man she thinks she’s in love with, who resides at Versailles as a member of the court of Louise’s brother, Louis, the Dauphin (Clovis Fouin).

Because the court is in mourning, Nannerl is obliged to dress as a boy to deliver the letter, and it is in this disguise that she first meets Louis, who is impressed with the musical talents of the young “man”.

Taking his time, director Feret surrounds the viewer with this environment of long-abandoned attitudes and customs. On one level the film seeks to enlist sympathy for the plight of its beautiful and talented heroine who, because she is a woman in a man’s world, will never be able to reach her potential. On another level, the film is a love story given an unusual dimension by the fact that, as she becomes closer to Louis, we are never certain if his feelings towards this “boy” are homosexual or whether he realises intuitively that “he” is a she.

The exceptionally beautiful photography by Benjamin Echazarreta is one of the film’s principal pleasures; using, as far as I could see, only natural light (as in Stanley Kubrick’s Barry Lyndon many scenes appear to be lit only by candles), Echazarreta achieves extraordinary results; some scenes were actually filmed inside Versailles and these interiors provide a vivid backdrop to the (presumably) fictional drama unfolding before them.

Compelling, too, is the realistic and extremely detailed method with which Feret depicts this cloistered world where music is of such importance. While Nannerl accompanies her brother on the clavichord, Wolfgang plays his achingly beautiful compositions on the violin with absolute confidence (young Moreau is totally convincing); and when Leopold instructs his son to compose an opera, the boy is hardly fazed. The fact that there were several musical prodigies competing in Europe at the time is reinforced when the Mozarts are forced to wait while an English boy, similar in age to Wolfgang, plays a recital. For Nannerl and Wolfgang who, despite the sexist restrictions imposed on the girl, are remarkably well adjusted siblings, music is fun; in one lovely scene they fool around before going to bed, inventing a new composition, and then dash off to play it before they forget it.

Mozart’s Sister is a film that offers rewards both for film and music lovers.