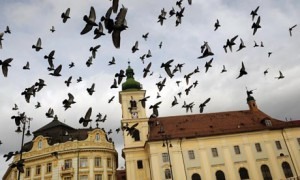 Pigeons fly over the centre of Sibiu, Transylvania, where recently discovered baroque manuscripts are being studied.
Photograph: Daniel Mihailescu/Getty

Bach and Corelli hidden among the lost musical heritage of Transylvania

Kurt Philippi hunches over a table in his cramped office humming and scribbling notes. He looks as if he might have been sitting there for centuries, staring at the baroque scores he is trying to decipher. “I can transcribe some of them in a week or so, but others can take as long as three months,” he says. “This work doesn’t require a lot of knowledge but it takes a lot of patience to dig out the interesting scores.”

Several thousand of these recently discovered manuscripts are held at the National Archives in Sibiu, a pretty town in Transylvania, central Romania. Philippi, a music consultant to the Evangelical church and conductor of the Sibiu Bach choir, has set himself the task of saving this trove of baroque music. “After the end of the Communist dictatorship, a large part of Romania’s German-speaking community emigrated to Germany and whole villages were deserted,” he explains. “We decided to gather up all we could find among our church records. I had no idea of the treasures hidden here.” His work has discovered a little known adaptation of the Pergolesi Stabat Mater, a Bach cantata arranged by the composer for the Lutheran church of Transylvania, works by Johann Sartorius, Knall, Corelli and a host of local composers.

The music has already been performed by the Ausonia ensemble, which features French, Belgian and Romanian musicians led by the Belgian harpsichordist Frédérick Haas. In May, Ausonia appeared in Bucharest and Cluj, Transylvania’s main town, introducing Romanians to a forgotten part of their heritage.

“This is a prosperous region with lots of splendid churches,” Haas enthuses. “When you go inside, even in small villages, you find magnificent organs, which means music, and where there’s music there are bound to be scores to fuel our dreams. Some of the works on our programme have not been performed for 200 or 300 years,” he adds.

Now there are only 1,400 Saxons in Sibiu. Philippi and his wife Ursula, an organist, are trying to resurrect the music that was once the pride of the region. “The scores we have discovered provide an understanding of the musical practice of that period,” she says. “The music was written by schoolmasters in small villages. They composed and played this very refined music by candlelight. They were not doing anything revolutionary, but the scores we have found show that they were just as good as the learned music being played in western Europe. I feel like we’ve discovered a treasure trove.”

Surrounded by manuscripts, Philippi continues his work transcribing notes from the distant past. “You see those boxes on the shelves,” he says, pointing to walls covered in manuscripts. “In this office alone there must be about 1,000.”

The task is laborious as each instrument has its own part and there was no overall score. If notes are missing, he must consult composers to fill the gaps. “Now is a good time to realise that a nation can reconnect with its history through music,” Philippi says. “We’re obviously not going to change the world with these scores, but when you see what beautiful music they were making in the villages 300 years ago, it gives you the strength to carry on.” And carry on he will.