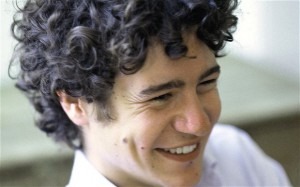 Robin Ticciati, musical director of the SCO, tells Ivan Hewett the secret of his success.

We’re used to prodigies in classical music. Hardly a month goes by without another wunderkind pianist or violinist appearing on the scene. But wunderkind conductors are a different proposition.

It’s not just their own arms and fingers they have to control, it’s a roomful of seasoned and probably sceptical professionals, many of whom will be old enough to be their father, or even grandfather.

Only a youngster with huge natural authority could take on such a task, and it’s clearly a quality Robin Ticciati, who is 28, has in abundance.

He got his first professional date aged 19 while still a student at Cambridge, and a year later became the youngest conductor ever to appear at La Scala Milan. At the age of 22, he became musical director of Glyndebourne on Tour (he’s taking over as director of the main house in two years’ time). Since then he’s risen to the top of the game with amazing speed. He has a list of guest appearances at top-rank orchestras and opera houses that a 50-year-old would envy, but what claims most of his energy is the musical directorship of the Scottish Chamber Orchestra, that he’s held since 2009.

So what’s Ticciati’s secret? I’m expecting a combination of the steely decisiveness of Pitt the Younger and the unchallengeable gravitas of Herbert von Karajan. What actually greets me at the restaurant in Glasgow is a slender, tousled-haired faun with a slow, wide smile and the look of someone who’s always gazing into far distances. As we sit and Ticciati gazes indecisively at the menu, savouring every choice (he’s a man who likes to savour things slowly), he tells me how it all started.

“I can remember the exact moment when I realised what a fabulous thing it would be to conduct. I was a 13 at the time, playing in the National Youth Orchestra — I started on the violin but switched to percussion because I liked the idea of playing the one thing that really stood out — and we were working on Sibelius’s First Symphony. We’d been rehearsing it for a week and we all thought we knew it. Then Sir Colin Davis came in. I remember we all stood for him, which really impressed me and seemed absolutely right. He explained to us how we had to enjoy the journey, and imagine that we were telling a kind of story to the audience in sound. Suddenly, I felt as if I didn’t know the piece at all, and had to start again. I remember thinking: ‘That’s what I want to do, I want to mould that story from up there!’ ”

When did he get his chance? “At school. My music teacher conducted a choir, and I asked if could take over for a rehearsal. He told me I could take over for a whole term, plan the concert programme, basically do everything. It was an incredible experience.” “Incredible” is Ticciati’s favourite word, but it never sounds like a cliché when he uses it. It’s a genuine expression of incredulous delight at the mysterious and bewitching aspects of the world, especially music.

What makes those things bewitching is the fact they’re just out of reach — a melancholy awareness reflected in the way Ticciati’s words often peter out in a sigh and a shake of the head. The surprising thing is that, rather than leading to indecisiveness, it gives him an unusual kind of certainty (in music if not in menus).

He may not be able to grasp this mysterious something, but he knows exactly in which direction it lies, and he’ll keep refining and refining the sound until he gets as close to it as is humanly possible.

Doing that needs technique, and yet Ticciati has never formally studied conducting. “I never wanted to do that thing of looking in the mirror and practising the exact moves to conduct in 7/8 time. For me it all has to come out of the piece. Take the downbeat that begins the Beethoven 1st piano concerto we’re doing tonight. What’s the right gesture to get the right weight of that sound? What’s the speed of the upbeat? Is it the same as the first note, or do I just give them a breath? Questions like this are never-ending.”

That search for the elusive right sound is what’s brought him back to Berlioz for his first CD with the SCO.

“I’d done his Symphonie Fantastique quite a few times, but I hadn’t said quite what I wanted to say. I thought I could get closer with a chamber orchestra, because after all the second movement is a waltz on a Mozartean scale. And in the first and third movements there’s a special kind of grace, to do with the uplift on the quaver upbeats, which I could never get with big orchestras. But I thought with these players I could.” And even if he hasn’t, he’ll have got a step closer. With Ticciati it’s the journey that matters.