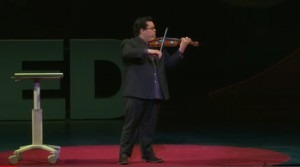 When Robert Gupta was caught between a career as a doctor and as a violinist, he realized his place was in the middle, with a bow in his hand and a sense of social justice in his heart. He tells a moving story of society’s marginalized and the power of music therapy, which can succeed where conventional medicine fails.

Violinist Robert Gupta joined the LA Philharmonic at the age of 19 — and maintains a passionate parallel interest in neurobiology and mental health issues.