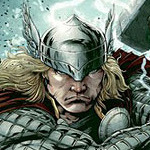 The roots of Thor and many other comic book figures stretch back to Wagner’s epic and earlier. Look, up in the sky! In case you haven’t noticed already, our entertainment stratosphere has grown crowded with muscle-bound superheroes in almost every conceivable shape and size: the franchise-rebooted likes of Spider-Man and Superman, battle-armored warriors such as Robin Hood and Perseus.


To whom do we owe our super-saturated superhero culture?

It would be easy to lay all of the credit (or blame) at the feet of comic-book artists and Hollywood executives. But superhero roots go much deeper than that, and if you excavate long enough, you will inevitably bump smack into Richard Wagner, the 19th century composer whose four- opera cycle “The Ring of the Nibelung” is regarded by many as an important genetic mother ship for today’s fleet of action heroes.

In terms of its cast of characters alone, Wagner’s “Ring” tetralogy has fanboy potential written all over it. The complex saga stars maidens, angry gods, female warriors, a temperamental dragon and an angsty teen hero whose powers get him into a lot of trouble.

The comic-book artist P. Craig Russell sees the “Ring” as a crucial evolutionary step in the development of superheroes as we know them today. “I think it’s a continuum — from Ulysses to Wotan to Superman,” he said by phone from his home in Ohio.

Russell, whose recent credits include “Hellboy” and “Coraline,” penned his own comic-book version of the “Ring,” a two-volume series published in 2002 by Dark Horse Comics that he considers the most personal project of his career. An opera fan, he has even spoken to gatherings of so-called Ring Nuts, extreme fans of the “Ring” cycle. “It’s almost like going to a comic book convention — you see the same faces,” he said.

Los Angeles Opera is producing the complete “Ring” for the first time beginning in May. Although this avant-garde staging isn’t for neophytes, its emphasis on spectacle and visual effects (light sabers play an important role) could make it the ideal “Ring” for superhero geeks.

Even those who have never experienced Wagner’s epic should have little trouble recognizing the names of some of its chief protagonists such as Wotan and Brünnhilde and her fellow Valkyries. That’s partly because Wagner himself borrowed from a number of well-known myths and legends — the 12th century Germanic poem the “Nibelungenlied” was his primary source. But it’s also because pop culture has taken Wagner’s creations over the years and liberally repurposed them into a multitude of hit incarnations.

Perhaps the most popular of the “Ring” characters are the Valkyries — the airborne female warriors of the cycle’s second opera, “Die Walküre,” who carry slain soldiers from the battlefields to their final resting places in Valhalla.

Marvel Comics created a character in 1970 named Valkyrie who continues to resurface in various forms in the company’s many franchises. Tall, blond and muscular, she is the essence of contemporary female empowerment.

She first appeared in “The Avengers” and has subsequently popped up — sometimes using the name Brünnhilde, sometimes in the form of a modern woman known as Samantha Parrington — in issues of ” The Incredible Hulk,” “The Defenders” and others.

On TV, the most recognizable offspring of Wagner’s Valkyries was the title character in the cult series “Xena: Warrior Princess.” In the sixth and final season, which aired in 2000-2001, viewers learned that Xena ( Lucy Lawless) was once an evil Valkyrie who presided over a reign of terror in the show’s pan-mythological universe.

The season featured three episodes inspired by the “Ring.” In one, Xena takes a Sapphic swim with the Rhine Maidens — a nod to the opening of “Das Rheingold,” the first opera in Wagner’s cycle.

Strains of Valkyrie DNA can also be found in page-to-screen heroines such as “X-Men’s” Jean Grey, who shares Brünnhilde’s suicidal tendencies, and the title character of “Elektra,” who experiences a Brünnhildian resurrection from a death-like state.

Ralph Macchio, a longtime writer and editor at Marvel, said mythological characters such as Wagner’s “have the angst and sense of absurdity and alienation that speak to a current reader. It’s all about wish fulfillment and hero worship,” he said, speaking from Marvel’s New York office. “That’s why they have lasted so long.”

The male superhero with the closest ties to the “Ring” is Marvel’s Thor. In 1980, comic-book veteran Roy Thomas penned several issues of the Mighty Thor that used elements of the “Ring” for an extended flashback to explain the origins of the comic’s Asgardian universe.

The issues incorporate major plot points from all four operas of Wagner’s cycle, including a climactic scene in which Siegfried braves a wall of flames to rescue his beloved Brünnhilde. (As the “Ring” itself contains many parallels to Norse mythology, the cross pollination of mythologies isn’t so far-fetched.)

Thomas said the story of Siegfried — the teen hero of the last two operas in Wagner’s cycle — is an important origination myth for contemporary heroes who are becoming “less and less likable.” “Nowadays, it’s all about the flawed hero. And so was Siegfried. He’s a snotty kid,” Thomas said from his home in South Carolina. “Maybe his attitude is due to the fact that he doesn’t have time to grow up. He has to slay a dragon, resurrect his lover and then die.”

The influence of Siegfried can be felt in moody antiheroes such as Batman (like Wagner’s protagonist, he was made an orphan by the deaths of his parents); Hellboy (both are muscle-bound lugs with emotional issues); and Spider-Man (like Siegfried, he’s a bag of raging hormones who often lets love get the better of him).

Thomas later embarked on another “Ring”-related project by writing a graphic-novel version of Wagner’s cycle for DC Comics, featuring illustrations by Gil Kane and published in 1989.

And then there’s Wotan, the king of the gods and Siegfried’s grandfather. DC Comics found a place for him as an enemy of the Green Lantern and Dr. Fate, but in a vastly altered form. Whereas Wagner’s Wotan is a powerful, one-eyed deity with ambiguous motives, the DC Comics version is a goblin-like villain who wears a green cape and red tights.

Still, the two Wotans share a number of traits: They both have the power to shape-shift into different beings, and both are able to hurl destructive bolts of electricity. More recently, Wotan has appeared in Cartoon Network’s “Batman: The Brave and the Bold.”

Marvel’s Thor and DC’s Green Lantern are both being made into feature films — with “Thor” directed by Kenneth Branagh — that will likely be seen in 2011.

The fanboy allure of Wagner’s “Ring” is difficult to explain, but some say that the attraction comes from the intensely pictorial nature of the operas, which can appeal to those weaned on comics.

Wagner, who studied theater and drama at university, was said to visualize his operas before composing them. He wrote his own librettos and spent several years conceiving the “Ring” project before composing a single note.

In his 1955 memoir “Surprised by Joy,” C.S. Lewis recalled that his first encounter with the “Ring” wasn’t via the music but through an illustrated adaptation by Arthur Rackham.

Lewis’ account of the incident conjures a striking mental image — “pure ‘Northerness’ engulfed me: a vision of huge, clear spaces hanging above the Atlantic in the endless twilight of Northern summer. . . .”

L.A. Opera’s production is being staged by Achim Freyer, a theater director who is also a painter. Freyer’s interpretation employs a succession of frieze-like poses that have more in common with the sequential imagery of a comic strip than traditional stage production.

Others say that the comic-nut appeal of the “Ring” lies in its total-immersion complexity — its profusion of characters, gnarled family trees and multi-chapter timeline. Like a long-running comic-book series, the narrative of the “Ring ” can be difficult to grasp for the uninitiated. Those who comprehend its many intricacies can claim a nerdy superiority.

Rob Tapert, a co-creator of “Xena” who is now working on the series “Spartacus: Blood and Sand,” said the entertainment industry’s attraction to ancient heroes such as Wagner’s is cyclical in nature due to advances in screen wizardry.

“The technology has changed and that means you can tell these stories all over again,” he said from the “Spartacus” set in New Zealand. “These stories have withstood the test of time. It’s really a matter of how we can do it all new for a new audience.”