Media
Recounting The History Of Opera – One Tweet At A Time
November 17th, 2009
Tags: opera, society 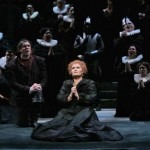 How many tweets does it take to cover the entire span of opera history? The San Diego Opera wants to find out and has launched a Twitter project in which it will tweet about everything from Monteverdi to Mozart to Philip Glass on a daily basis. With more than 400 years to cover — and at a rate of two tweets per day — the project could take years to finish.

The project, which can be found at #operahistory, launched in early November. The company said it has started at the beginning of opera history — around the year 1580 or so — and will continue into the 21st century.

Nicolas Reveles, director of education and outreach at San Diego Opera, is the author of the tweets and said he is using resources like the New Grove Dictionary of Opera and other volumes to supplement his knowledge.

“I’m not going year by year but every five years or so,” he told Culture Monster. “Significant premieres and significant composers, that sort of thing. We also want to introduce people to stuff they may not be aware of, like the material written between 1580 to the mid-1600s — mostly Baroque operas.”

He said the idea came while he was reading a newspaper article about a literary magazine to be published only in digital form. The article also mentioned a short story that was published entirely on Twitter. From there came his idea for a tweeted history of opera.

Reveles said he is trying to make the tweets fun and irreverent. One recent tweet reads, “1600: Caccini, highly competitive, forbids his singers to perform Peri’s contributions to Euridice. Peri pissed!”

Another one published this morning says: “1607: Orfeo mixes the new recitative style of Peri (Euridice) & instrumental/choral ‘interjections’. It works.”

So far, the project has proved to be rather labor-intensive. “The plan is to go up to the present, but we’ll see what happens,” said Reveles. “I probably didn’t realize entirely what I was getting into. I’m OK for the next six weeks. We’ll keep trudging along.”

#operahistory is just the latest opera-related project to debut on Twitter. Earlier this year, Britain’s Royal Opera House announced the world’s first Twitter opera, which it eventually staged in London. And the semi-regular Twitter opera-plot contest — in which people summarize the plot of an opera in the space of a tweet — has already proved to be popular among fans around the world.