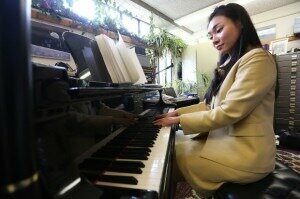 Yeaji Kim practices in the piano studio of professor Todd Welbourne. The South Korea-born Kim, who earned a doctorate in piano performance and pedagogy from UW-Madison this month, has created a new form of musical notation that she says will allow both visually impaired and sighted students to learn music side by side.

Yeaji Kim was a small child when, bit by bit, the world began to fade from view. And so did friends.

Growing up in South Korea, “I had a little bit of vision when I was very little,” she said. “But it wasn’t enough vision to catch some important things. So I liked just staying home, rather than playing with (other) kids.”

Her sight continued to disappear. Yet before long, young Yeaji (“YAY-jee”) found something powerful — music — that would reconnect her with peers. It would take her halfway around the world, to Madison, to invent a way that could change the way music is taught.

Kim, now 33, is among 22 students awarded a doctorate this month from the UW-Madison School of Music. At the core of the dissertation that helped her earn a Doctor of Musical Arts degree is Kim’s development of a “Tactile Stave Notation” system for reading music.

The method gives sheet music a 3-D quality by slightly elevating the staff and notes printed on it, allowing both visually impaired musicians and sighted people to read the same musical score.

That’s a departure from the current system, where blind musicians often must rely on a complex Braille system. To master a Chopin prelude, for example, Kim must read the part for the left hand in Braille, then the part for the right hand. Mentally, she has to put both parts together, memorizing four to eight measures of the piece at a time.

“She memorizes immediately,” said Todd Welbourne, professor of piano at UW-Madison and Kim’s instructor since she came to Wisconsin in 2010.

Yet, as remarkable as the Braille learning process is, it adds a level of difficulty for very young students.

“The (Braille) letter system is already very complicated,” Welbourne said. “And then to have the symbols also mean something else, to mean music, can be very confusing to a kid.”

By contrast, Kim’s new system is designed so that anyone, visually impaired or not, can use it.

“If you have the same score in front of you, all musicians, sighted or not, can learn in the same room,” Welbourne said. “If you have a 3-D score, the sighted kids are seeing the (printed) score, and the Braille kid is feeling the same thing.”

The method is “revolutionary,” said Jessica Johnson, a professor of piano pedagogy at UW-Madison who has worked closely with Kim.

“What’s so moving to me is she’s concerned with (visually impaired) kids who maybe are not going to be professional musicians — but want to sing in choir, or play in a rock band or want to study piano like almost half of Korea studies piano,” Johnson said.

Kim has applied for a provisional patent but needs help paying the legal fees, she said. Though she’ll return to South Korea at the end of May for two concert engagements, she hopes to find a way to return to the U.S. next fall to continue work on her invention.

A UW-Madison student who saw a video about Kim on the university’s website last week brought her to the attention of Tim Osswald, co-director of the polymer engineering center at the Department of Mechanical Engineering. Immediately, a team of Osswald’s undergraduate and graduate students began brainstorming ways to mass produce Kim’s Tactile Stave Notation.

Currently, her process is extremely labor intensive and must be done by hand, note by note.

“We do research in the area of 3-D printing. We see this as an opportunity to push the envelope and have undergraduate and graduate students try to find a solution for her,” Osswald said.

The breakthrough for Kim’s innovation came at the piano itself.

Kim was taking a lesson from Welbourne, but using her Braille score could not grasp a concept her teacher was trying to convey.

“I was wondering why she wasn’t bringing out the inner melody,” Welbourne said.

By looking at the score, the sighted Welbourne could see the notes in one hand were “beamed,” or connected, in a certain way.

Kim’s Braille score didn’t convey that. Once she was able to read the piece of music using her 3-D approach, she could feel the beaming and the musical connection.

“For an artist-level performance, you need to have every clue you can get” from the composer’s manuscript, Welbourne said.

As a child, Kim begged her mother, a nurse and public health advocate for their tiny rural community, to get a piano. Her mother bought an Electone, a small electronic keyboard that’s popular in Asia.

Kim enrolled at the Seoul National School for the Blind, but the daily commute from home proved too difficult. So she and her grandmother moved into town, closer to the school. There Kim learned Braille, but she played only a “bit” of piano.

“I didn’t have any serious intention,” she said. “I spent a lot of time listening to the piano and imitating the playing. I had a teacher, but they didn’t know how to teach me to read (music), or the proper position or posture to play piano.”

At 15, she began studying with a more advanced teacher.

“What I liked was that I could hang out with sighted kids,” she said, “and I began studying more intensely, different repertoire.”

“I got accepted, but they didn’t know what to do,” she recalled. “They had never had some kind of student like me — visually impaired, or any kind of disabled musician. I was very timid, but active. I have fought against many, many things, like some professors who had very, very serious prejudices.”

At Sookmyung, Kim earned a bachelor’s in piano performance and a master’s in music education.

She came to the U.S. in 2007 to earn another master’s in piano performance at the prestigious Peabody Conservatory of Johns Hopkins University in Baltimore.

Coming to the U.S. forced her to raise her level of English — something made more complicated because of her lack of sight.

“Other people can sometimes recognize what others think because they can see their facial expression. They can communicate with gestures,” she said. “But I have no idea of what they’re (showing) on their face. So everytime I had to negotiate with the professors, I had to speak — more and more. I had to write (English), so I was quite stressed, and I didn’t really have enough time to practice.”

She applied to UW-Madison’s doctoral program, but the day of her audition got snowed in at the Baltimore airport. The Madison faculty arranged another audition for her, and let her play 40 minutes — far more than the standard 10 at some universities.

“We had to talk about it. We had not had anyone visually impaired in the graduate program,” he said. “We had a blind singer in the undergrad program a few years before, and she did very well. But at a doctoral level, you have to be a little more sure of the outcome, that the person can succeed.”

“We loved (Kim’s) playing. Her playing was very beautiful and very personal. It speaks very well to audiences,” he said. “But the deciding event was talking about her interest in developing pedagogical materials for visually impaired kids in Korea.”

“She’s an incredibly humble person, and sometimes I think she doesn’t realize how truly exceptional she is,” Johnson said. “When you first meet her, she seems very refined and elegant and very sweet — which she is — but she’s also a real fighter inside. She’s been through a lot, and she’s willing to challenge your ideas — and we love that.”