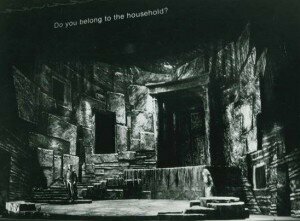 In 1983, the Canadian Opera Company in Toronto tried a grand experiment. While the singers performed Elektra in German onstage, simultaneous translations in English were projected above the stage. These “supertitles,” as they’ve come to be known, were quickly adopted at opera houses and are now an expected part of the opera-going experience.

The idea came from the company’s artistic director, the late Lotfi Mansouri, who recalled in a 2010 National Endowment for the Arts interview that not everyone thought his idea was a good one.

“I got blasted,” Mansouri said. “They called it the ‘plague from Canada.’ I had vulgarized opera, but I didn’t give a damn because all of a sudden, the audience was involved.” Full story.