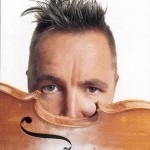 CLASSICAL music is cool again. How do we know? Because cool people say so. Alex James, the bassist with Brit-pop superstars Blur, wrote in the British tabloid The Sun that “classical music isn’t just for snobs … Tchaikovsky’s Romeo and Juliet is great lovemaking music, better than Foo Fighters. You’re talking a different class of shag.”

Radiohead guitarist Jonny Greenwood is more likely to talk up the work of Bartok and Messiaen than his own band. German violin virtuoso David Garrett is a bona fide heart-throb. American cellist-composer Zoe Keating took the top spot on the iTunes classical music list with the help of her million-plus Twitter followers and YouTube.

Last year, the Associated Press reported the rock-star-like reception of the 28-year-old Venezuelan conductor Gustavo Dudamel as he took the helm of the Los Angeles Philharmonic. “He arrived at his first rehearsal wearing trendy black sneakers and a persistent smile that showed the sheer fun he’s having directing one of the world’s premiere orchestras … he greeted onlookers with a fist bump and hugged musicians.” Dudamel later declared at a standing-room-only press conference: “Classical music is cool.”

“Of course it is,” says Nigel Kennedy, the spiky-haired British violinist who took Vivaldi’s Four Seasons to the upper echelons of the music charts in 1989 and upset a lot of purists along the way with his punk look and Cockney mannerisms. “Compared to how it is in the rest of the music industry, it’s the anarchic, creative cool people who choose to get into classical music these days.”

Kennedy, now on tour in Australia, fingers the cynicism and vacuity in today’s pop charts as one reason why younger audiences are seeking musical experiences with more depth. “I think this time will be seen as a golden age for classical music,” he says. “With the iPod and the internet there’s no barriers to the music now. When I was 16 it was different. You had to look for it in the dusty shelves up the back of music stores or in snooty record shops.”

The waning power of the record companies is also a factor, he says. “They don’t have the influence on taste they used to have. They’re falling by the wayside and it’s very helpful in many ways. There’s less categorisation in music. I think we should drop the word ‘classical’ altogether. Beethoven and Brahms can just sit among all the other ‘B’s” on your iPod. That way you don’t get trapped by the idea of genre.”

Kennedy says classical music becomes “uncool” only when it tries too hard. “There’s nothing worse than a classical artist being obsequious or trying to ingratiate himself with a target audience when he or she doesn’t have to,” he says. “I see a lot of that and that’s when classical music starts looking and feeling embarrassing because the performer is so desperate to be liked by the audience. It’s like watching a politician trying to win votes. They always come out looking like smarmy bastards.”

Richard Tognetti, violinist and leader of the Australian Chamber Orchestra, doesn’t see a golden age at all. “In generalised awareness of classical music, perhaps,” he says. “But not in terms of artistry.” He sighs audibly at the juxtaposition of classical and “cool”.

“It reminds me of a great David Bowie quote from a few years ago. He said he felt so cool that he was going cold,” he says. “For me cool has always been a dirty word when it comes to art. Art should transcend such things. It transcends relevance as well – and irrelevance – that’s the cool thing about it. If you are considered cool and relevant today, sure enough you are going to be irrelevant tomorrow.”

He quotes again, this time Jean Cocteau: “Art produces ugly things that become beautiful with time and fashion produces beautiful things that become ugly with time. That’s how it is in music,” says Tognetti. “It serves no purpose to ‘coolify’ Bruckner, any more than it serves to make Dostoevsky ‘hip’. People who are open-minded enough will arrive at great art whatever it is. It speaks for itself. To me that’s the definition of cool.”

Record companies don’t have the inclination to wait that long, however. They have been in the business of pushing cool for the best part of half a century and for the past decade they have applied that expertise to their classical roster more ruthlessly. Now it seems that a classical recording career is as dependent on model looks and willingness to pout and pose for CD covers as it is on technique and interpretive ability. How would Horowitz and Perlman, the classical chart heavyweights of the ’70s and ’80s, stack up against the all-girl quartet Bond (classical music’s Spice Girls), the smouldering Singaporean violinist Vanessa Mae and pop impresario Simon Cowell’s dreamboat “popera” act Il Divo?

“The best thing that could happen right now would be if all classical music were banned,” Tognetti says. “Send it underground. The worst thing that can happen to the music is if people try to make it into something palatable. That’s when you get things like Bond.”

For many, the leggy string quartet epitomises the lengths to which classical musicians will go to achieve crossover success. Purists see their work as a dilution and misrepresentation of the classical tradition. Pop commentators sneer at their lack of street cred.

Kennedy, whose dramatic, performance-driven recordings have sold millions of copies, has endured the sniping from both sides. “A lot of people back then were pissed off by my success,” he says. “When I started there were people who seemed to regard the arts as their private club. Selling records was like inviting the riff-raff in.”

On balance, a dash of rock ‘n’ roll is a positive thing, says Kennedy, who is using his violin to explore the music of Jimi Hendrix. “I mean, people were throwing their knickers at Franz Listz. These cats were the rock stars of their day. Paganini, for example, he was outrageous!”

Taking their lead from rock and pop musicians, classical players have become much better at communicating with their audience, Kennedy says. “Classical music had to loosen up or it was going to die. The manner in which you play is really important now. If you’re a violinist and you’re playing as if there’s a sheet of glass between you and the audience, that has an alienating effect, particularly on young audiences. They expect much more direct communication.”

Matthew Hindson, composer and chair of Arts Music at Sydney Conservatorium, shares the sentiments. “The formal, almost ritualistic feel of high art needs to be broken down if it’s ever going to appeal to young people,” he says.

“Some of the traditions that have grown around classical music – like not being allowed to clap between movements – is a real turn-off for them. In Beethoven’s time people were actually encouraged to applaud. And often there’s so little interaction between the players. They sit down, they read the notes, they finish. Young audiences are used to seeing musicians physically responding to the music they are playing.”

Marketing and presentation are important, Hindson says, but content is still king. “Programming is crucial. You’re never going to get a young audience with a concert of organ fugues – I find that kind of thing pretty hard to come at myself – but if you can program music that’s relevant to the times we’re in, that’s half the battle. And I’ve always found it really good when young people realise that not all composers are dead. That’s always a very positive thing for them.”

Hindson’s personal musical tastes range from death metal to Elvis Presley and his high-octane compositions include Nintendo Music for clarinet in A and piano and Homage to Metallica. (Heavy metal millionaires Metallica exert an uncommon fascination for contemporary composers and orchestras. In 1999, they recorded S&M, two performances with the San Francisco Symphony Orchestra. Conductor Michael Kamen wrote in the liner notes how “orchestra members leapt to their feet, excited to be making music from the edge of their seats”. He later referred to the excitement as a “Wagnerian orgasm”. Since then, a number of international classical groups have recorded and performed Metallica covers.)

“I’m a great believer in presenting music of our time because it speaks to what we are today. But in order to do so, young audiences have to know it is there,” Hindson says. “Education is the key.”

Tognetti says that without a school system that understands the value of music, the classical scene will remain “in crisis”.

“It’s considered a right to be able to read books, so why isn’t it a right to learn to read music and play an instrument?” he says. “It doesn’t matter if you end up playing pop or rock or whatever, it allows you to approach music from an educated standpoint. At the moment I think kids have no idea what classical music even is. They think its something to do with Muzak or Andre Rieu.”

Kennedy agrees. “The first thing to get cut in the education system is always music. I would prefer it if they cut maths down to just what you need to go shopping. I mean, who the f— needs algebra?

“When young people play music together in an orchestral setting there’s effort and communication – it supersedes what goes on in sport. There’s something about making music together in a room that’s not being made by an amplifier or a computer. It’s a tactile, emotional and intellectual experience for the people who are doing it.

“They gain confidence, skill, a sense of community. When you cut that out of the curriculum, you lose one of the great learning experiences that people can have and you’re losing the next generation of classical music audiences.”