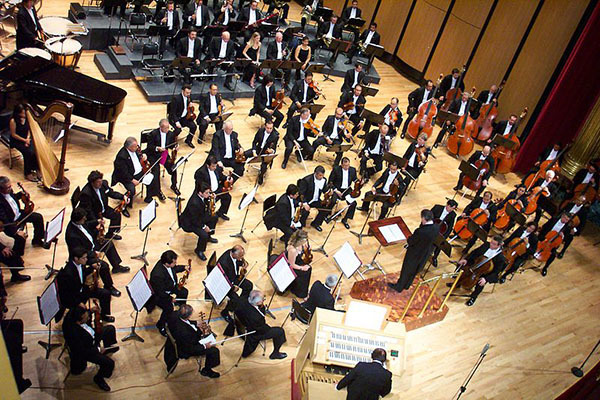 A new study from Australia finds working as an orchestral musician takes an intense physical toll.

The next time you’re at an orchestra concert, don’t stint on the applause for those musicians. In order to give you pleasure, they’re experiencing a lot of pain—physical and emotional.

That’s the conclusion of a new study from Australia. It reports 84 percent of professional orchestral musicians in that nation has experienced “performance-impairing pain” at some point, and 50 percent were experiencing symptoms at the time of the survey.

The study, published in the journal Psychology of Music, also finds a complicated relationship between players’ physical pain and depression.

Dianna Kenny and Bronwen Ackermann of the University of Sydney asked all musicians in the nation’s eight premiere orchestras (including opera orchestras) to participate in the study. An impressive 70 percent, or 377, agreed to do so.

The players filled out a series of questions designed to measure performance anxiety, generalized anxiety, and depression. They were then asked how often, and how severely, they experienced performance-related musculoskeletal disorders, which the researchers define as “any pain, weakness, numbness, tingling or other symptoms (aside from short-lived aches and pains) that interfere with your ability to play your instrument at the level to which you were accustomed.”

Players used various techniques to deal with the pain—mostly to no avail. “Engagement of physical activity of any kind, including yoga, swimming, jogging and gym classes, did not bestow any protection against (pain) frequency or severity,” they add.

Interestingly, one group of musicians, making up 25 percent of the sample, denied experiencing any symptoms of depression but reported experiencing the most severe pain. Kenny and Ackermann speculate that, for many members of this group, repressed negative emotions may be taking the form of physical pain.

With that in mind, they recommend that pain treatment for professional musicians “would be more effective if depression and/or music performance anxiety were assessed and, where indicated, treated concurrently.”

Indeed, it would be ironic if the people who stimulate the emotions of so many listeners are repressing their own negative feelings—and paying a physical price for doing so.