Media
Playing by Heart, With or Without a Score
May 31st, 2013
Tags: piano, presentations 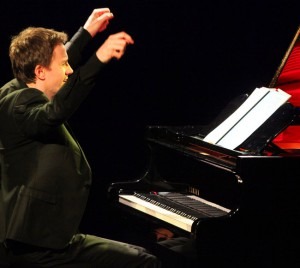 It would seem that the filmmaker Michael Haneke, who wrote and directed the wrenching and poignantly acted new French movie “Amour,” is swept away by the mystique of a pianist, alone onstage, conveying mastery and utter oneness with music by playing a great piece from memory. The drama of playing from memory is at the crux of a scene involving the elegant French pianist Alexandre Tharaud, who, portraying himself, has a small but crucial role.

The story revolves around an elderly Parisian couple, Georges and Anne, retired music teachers, as they cope with the stroke that has paralyzed Anne’s right side. In one scene Mr. Tharaud, in the role of a former student of Anne’s who has gone on to a significant career, makes an unannounced visit to his old teacher to see how she is faring. He can barely contain his shock at her condition. Anne (Emmanuelle Riva) asks a favor: Would Alexandre play a piece she made him learn when he was 12? It is Beethoven’s Bagatelle in G minor, the second of the Six Bagatelles (Op. 126), Beethoven’s last published piano work.

At first Mr. Tharaud demurs. He has not played the piece for years, he explains, and is not sure he can remember it. Then, saying he will try, he proceeds to play the stormy bagatelle flawlessly, at least as much as we hear before the film cuts to the next scene. I suppose it would have been too pedestrian a touch if, when Alexandre said he was not sure he could remember the bagatelle, Anne had said, “Oh, I have the score, of course, right there on the shelf.”

Over the years I have observed that the rigid protocol in classical music whereby solo performers, especially pianists, are expected to play from memory seems finally, thank goodness, to be loosening its hold. What matters, or should matter, is the quality of the music making, not the means by which an artist renders a fine performance.

Increasingly, major pianists like Peter Serkin and Olli Mustonen have sometimes chosen to play a solo work using the printed score. The pianist Gilbert Kalish, best known as an exemplary chamber music performer and champion of contemporary music, has long played all repertory, including solo pieces (Haydn sonatas, Brahms intermezzos), using scores. As a faculty member of the excellent music department at Stony Brook University, Mr. Kalish spearheaded a change in the degree requirements in the 1980s, so that student pianists could play any work in their official recitals, from memory or not, whichever resulted in the best, most confident performance.

Yet there is still widespread and, to me, surprising, adherence in the field to the protocol of playing solo repertory from memory. This season Mr. Tharaud took a little flak for performing recitals in New York using printed scores.

In October at the Greenwich Village music club Le Poisson Rouge he played excerpts from his delightful new Virgin Classics recording “Le Boeuf sur le Toit,” taken from the name of the club that became a haven for Parisian cabaret during the Jazz Age. The next night Mr. Tharaud played a standard program at Weill Recital Hall with works by Scarlatti, Ravel, Chopin and Liszt. At each concert, rather than performing from memory, he used scores, something that Steve Smith, who reviewed Mr. Tharaud’s Weill recital for The New York Times, did not even mention. It was not worth commenting on. The news, as Mr. Smith made clear, was Mr. Tharaud’s absorbing and mercurial performances.

Yet the photo of Mr. Tharaud that accompanied the review clearly showed him playing from a score, and some readers were quick to react on social media. Somehow the idea persists that for a pianist to use a score in a performance suggests a lack of mastery or sufficient preparation.

Not necessarily. Though it is exciting and even magical to see a pianist giving a triumphant performance of the demonically difficult Liszt Piano Sonata, or any work, from memory, there are different kinds of talents. The towering Russian pianist Sviatoslav Richter, by the time he reached his 60s, found it increasingly hard to play from memory. He started using scores in performances. No one questioned him. This was, after all, Richter, a titan of the keyboard. Yet if a Juilliard student can give brilliant and personal accounts of works like Elliott Carter’s daunting Piano Sonata or Chopin’s 24 Preludes but needs the scores on the music stand to do so, why should that matter?

The superb pianist Stephen Hough, in an article in The Telegraph of London last year, presented both sides of the case well. As he pointed out, it goes against history to perform works of early eras from memory. It was only when Liszt, partly out of showmanship, began playing everything, including monumental Beethoven sonatas, from memory that the mystique took hold.

In earlier eras there was composed music, which was always played from the score, and there was improvised music. Since performers were almost always composers as well, as Mr. Hough explained, for a pianist to play, say, a Chopin ballade from memory would have been considered the height of arrogance, as if the pianist were suggesting that he had composed the piece.

At major performing institutions attitudes toward playing from memory have opened up. Today the artistic staff at Carnegie Hall would never think of compelling any artist to play from memory. This is a personal artistic choice. But organizations that foster student musicians still mostly insist on standard protocols. Young Concert Artists, which presents exceptional emerging artists in concert, hews to standard practice for its competitive auditions. The requirements state: “Concertos and solo repertoire for all instruments and voice must be performed by memory. Scores may be used only in chamber music, sonatas with accompaniment and contemporary works.”

It has always amused me that contemporary music is exempted from the memorization requirement. I think some pianists might find the Ligeti études, which are so technically challenging that by the time you learn them you usually know them cold, a lot easier to play from memory than Bach’s “Goldberg” Variations.

This fall, in two programs just five days apart at the 92nd Street Y, the pianist Andras Schiff played Bach’s complete “Well-Tempered Clavier,” all 48 preludes and fugues, containing some of the most intricate contrapuntal music ever written. He played both recitals from memory, an astonishing achievement.

Yet Mr. Schiff, a masterly Bach interpreter, has played this music for 50 years, since his childhood. In interviews he has said that playing from memory is not the hardest part for him in performing Bach’s keyboard works, and I believe him.

Around the same time at Alice Tully Hall, as part of Lincoln Center’s White Light Festival, the pianist Emanuel Ax took part in an intriguing program, whose main work was Schoenberg’s arrangement (later completed by the composer Rainer Riehn) of Mahler’s “Lied von der Erde” for chamber ensemble, played by members of the New York Philharmonic with Mr. Ax at the piano. But he set the mood by opening the program with two solo works: Bach’s Prelude and Fugue No. 8 from “The Well-Tempered Clavier,” Book 1; and Schoenberg’s Six Little Piano Pieces (Op. 19). He played the Bach work using the printed score and the Schoenberg from memory.

Now no one who has heard Mr. Ax over the years could possibly think he has any difficulty playing anything from memory. But this was a collaborative program. It was inspiring to see Mr. Ax taking part as just one of 15 dedicated players in the arrangement of “Das Lied.” So beginning the program with the pensive Bach work was a musical gesture, not a time to showcase memorization.

For me there was something touching about seeing a great pianist play a Bach prelude and fugue using the score. Every wondrous element of this complex music is right on the page. It looks almost as beautiful as it sounds.