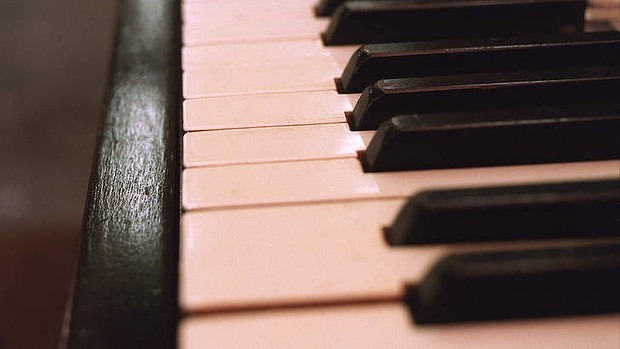 ‘There’s no definitive answer yet for he cause of Ryland’s Greensleeves moment.’ Photo: Mario Borg

When he turned three, our son Ryland collapsed in tears on the lounge room floor beside his birthday present, a Casio keyboard. ”What’s the matter?” we asked. ”I don’t know,” he sobbed. The keyboard’s play-along version of Greensleeves tinkered on. ”Are you all right?” my wife asked again. ”I’m sad!” he said, unable to haul himself from the floor.

In the kitchen later, he hummed Greensleeves and started bawling. We were convinced this 430-year-old English folk song was the source of his disturbance. The next day Ryland wanted to play with his keyboard again. He was excited. But as soon as he flicked the switch to Greensleeves, he cried.

It’s clear music can affect mood. Listen to anything by Slayer or Mozart’s Requiem and your mood is likely to spiral down. Likewise, the cheery swell of the third movement of Vivaldi’s Spring makes us swing from the trees. But should any music have a three-year-old drowning his Casio in tears?

I couldn’t accept that before his Casio meltdown, Ryland had been sad, had heard this particular song, and then associated the song with his emotion. It hadn’t happened at home – and family or carers would have told us if such a thing had occurred on their watch. When Ryland bawled for a third time, we put the keyboard away. He loved tapping the keys and humming along, but it wasn’t worth the ensuing drama.

The consensus was that Ryland’s experience was rare. But the now 16-year-old daughter of Grace Thompson, lecturer in music therapy at Melbourne University, also had a meltdown as a toddler during music lessons. ”There was a piece called The Sad Donkey and every time she heard [it] she would start to cry … I had to ask the teacher if we could skip that song.” Thompson says her daughter is now ”perfectly ‘normal’ in all respects … but remained highly sensitive”.

This sensitivity interests Nikki Rickard, associate professor in the school of psychology and psychiatry at Monash University. She suggests Ryland could have a case of ”extreme empathy”, which sometimes means people actually feel others’ physical and emotional pain.

”Empathy, and also emotional contagion [catching emotions from others] have been proposed as main reasons music can be such a powerful means of inducing emotions in us,” Rickard says. ”People with more empathy will obviously feel this more strongly.”

Katrina McFerran, director of the National Music Therapy Research Unit, agrees Ryland’s response could be an indicator of deep sensitivity. ”[It] may be attached to either a very fine sense of creativity or a vulnerability for mental health problems, or possibly both,” she says, adding that her thoughts were only anecdotal. Another music therapist says Ryland’s experience pointed to the possibility of him having an ”extraordinary mind”, but also to being potentially high on the Asperger spectrum.

In his book Musicophilia: Tales of Music and the Brain, Oliver Sacks tells the story of American composer Tobias Picker. His extraordinary mind allowed him to recognise and tap out tunes on a piano at Ryland’s age, and by seven he could play complex pieces after one listen. But he constantly found himself ”overwhelmed by musical emotion”. His story led Sacks to believe in a ”musical brain” and new technology has shown the physiological changes that musical training brings to musicians’ grey matter.

Sacks considered the role of procedural and episodic memory in how we experience music. The former is held in many neural systems, which ensures it sticks. Episodic memory, the one music theorists say operates to create mood when we hear music, is built on perceptions of highly individualised experiences. Ryland’s response to music could be evidence for what science is demonstrating about how emotions function in the brain.

”One intriguing possibility is that [Ryland’s] mirror neuron system is being activated,” Rickard says, adding that mirror neurons have been recorded in observers of goal-directed actions. ”Many have proposed that emotional empathy might also act in this way … an observer of emotions in another [or in music] could actually feel the emotion being expressed.”

There’s no definitive answer yet for the cause of Ryland’s Greensleeves moment. So, rather than worrying about it, I’m speculating he’ll play guitar better than me. He’s nearly four now and we’ve brought out the Casio again. Thankfully, he’s more interested in the keys than the recorded songs. And the only time he cries is when his big brother tells him to turn it down.