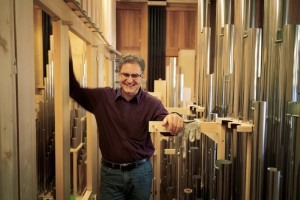 Wendelin Eberle at Vienna's University of Music and Performing Arts, where his firm is currently installing a new instrument.
credit: Severin Koller for
The Wall Street Journal

The new pipe organ for the Great Hall of Vienna’s Musikverein, home of the Vienna Philharmonic, stands 36 feet high and weighs about 28 tons, with 6,138 pipes and tens of thousands of pieces. Operated both mechanically and electronically, it is as complicated as a small airplane.

The instrument is the creation of Austria’s Wendelin Eberle and his firm Rieger Orgelbau, based in Schwarzach, in the country’s far west. Mr. Eberle, Rieger’s owner and managing director, works on the design of each organ and supervises a staff of 58. “I’m the mastermind,” he says.

A new Rieger organ can be found in a parish church near Schwarzach, in the forested Alpine region where Mr. Eberle, now 49 years old, grew up on a dairy farm and where he still lives. The firm’s organs also grace some of Christendom’s holiest churches, such as the Church of the Nativity in Bethlehem, and preside over big new Asian concert halls like the Shenzhen Cultural Center and the Shanghai Oriental Art Center. Rieger is now working on new organs for the Philharmonie de Paris and Vienna’s University of Music and Performing Arts, a short walk from the Musikverein.

Mr. Eberle first started working for the 167-year-old firm as a 15-year-old apprentice. In 1990, he began to oversee organ construction, and in 2003, he bought the company.

An organ commission usually begins with a competition. Early on, Mr. Eberle and a small team inspect and measure the venue with high-tech instruments. The building’s own figures are never precise enough. He says, “We need more specific details than ‘the height is 27 meters.’ ” Mr. Eberle also tries to conjure up the finished instrument. “When I start a project,” he says, “I see the organ, I can walk through the organ, and I hear the organ. This comes within the first few days of the competition—it becomes part of me.”

One key consideration: how the organ will affect a building’s stability. Mr. Eberle often has to create a sculptural facade for it as well. With the Musikverein organ, Mr. Eberle restored its original 19th-century case, designed by the building’s architect. He says that the total cost of the instrument was just over €2 million (about $2.6 million), slightly less than the organs he made for Shenzhen and Shanghai.

The text message notifying Mr. Eberle in 2008 that he had won the Vienna commission ushered in the design phase. Among “thousands of decisions,” he had to figure out what kind of wood to use for various parts. A Rieger organ, usually around 80% wood, may need material from up to 17 different kinds of trees. The choice generally depends on the wood’s tonal properties, with the destination’s climate a factor as well. He has selected teak wood for African organs, to guard against termites, and specially dried wood to accommodate southern China’s humid heat.

Mr. Eberle must also decide what kind of metal alloys to use in the pipes. They are often made with a mixture of lead and tin, and the higher the tin content, “the brighter the sound.”

It takes three or four months to complete the technical details; then Mr. Eberle’s staff can produce parts. That is “the point where I can relax a little bit,” he says.

Once the parts are made, the organ must be fully assembled, or “preinstalled,” in a 60-foot-high section of the Rieger workshop, a process that can last months. This is the time for any last-minute fixes. “It would be a disaster,” Mr. Eberle says, if the firm had to make them on-site without its machinery.

After on-site installation, a team of Rieger “voicers” must adjust the organ musically to create the desired sound. The Musikverein organ required about five months of voicing—much of it in the middle of the night, when the hall wasn’t used for concerts or rehearsals—with periodic visits by Mr. Eberle.

Some challenges have been downright scary. In spring 2002, Mr. Eberle and a small Rieger team were staying near the Church of the Nativity, where they were installing two new organs. Dozens of Palestinian militants sought refuge in the church and took hostages. The Israeli Defense Force sent tanks into the area around the church—and just outside the team’s living quarters. They were holed up for six days until the Austrian Embassy organized a rescue.

Mr. Eberle spends half his time on the road, but he is always glad to return home. He and his wife “sing every day” with their sons, 6 and 4, who are also learning to play the cello and the violin. Mr. Eberle plays baroque sonatas on the trumpet as well, with his wife at the piano. Musical collaboration, in fact, is how he sees his work. “I think of the organ as a human voice,” he says, “not an independent instrument but part of a musical community.” And that, he adds, “inspires the organ building.”