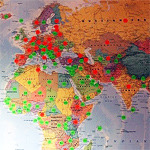 Philip Sheppard has just recorded every known national anthem for use at the Olympic Games. The man deserves a medal, says Adam Sweeting.


It was the Grove Dictionary of Music that commented that national anthems are “rarely noted for their musical quality”, yet the nations of the world continue to cling to them with extraordinary tenacity. One man who knows this better than anybody is composer and conductor Philip Sheppard, who has spent the past week sequestered in Abbey Road studios with the London Philharmonic Orchestra, recording fresh arrangements of all the world’s 205 national anthems.

With the 2012 Olympics coming into view over the London skyline, a spruced-up batch of anthems was deemed necessary for playing at victory ceremonies and sundry other official moments. Sheppard, who created a new arrangement of God Save the Queen to be played at the closing ceremony of the Beijing Olympics in 2008, found himself squarely in the frame.

“I didn’t even know I was being considered,” he says, taking a lunchtime break in the sunlit garden outside the Abbey Road canteen. Even wearing a short-sleeved stripy shirt and chinos, he bears more than a passing resemblance to the embattled Deputy PM Nick Clegg. “I think it was mid-autumn last year when I was asked if I was interested in doing it.”

The problem was that he then had to go and research all the anthems. “They’re not given to you,” he says. “You have to find them out yourself. Luckily I’m in love with the British Library, and I do enjoy the investigative side of it.”

Some anthems need no introduction – we think here of The Star-Spangled Banner or La Marseillaise – but others are barely known outside some of the remotest corners of the globe. Sheppard, a pub-quiz regular, is looking forward to showing off his vastly improved geographical knowledge.

“I now feel I know these anthems terribly well, and I’ve created a frighteningly huge database. I know where Comoros is, and Karabati and Tuvalu, and even Bhutan – it’s great.”

But while it’s tempting to view the anthems project as a kind of super-Eurovision with global pretensions, Sheppard has become aware that serious issues lurk beneath the sometimes ludicrous musical surfaces. Though many anthems, even ones from central Africa, sound like marching songs from third-rate 19th-century operettas, national anthems frequently come loaded with historical and political baggage, and it can be unwise to treat them too frivolously.

“Something I wrangled with initially was the difference between patriotism and nationalism,” he says. “If it’s something a state uses to impose itself on another, like planting a flag, that can be uncomfortable, but if it’s something the people themselves are proud of, than that’s different.

“For instance, we’ve recorded anthems from Tunisia, Egypt, Libya and Sudan, and all these countries are in massive flux. I was watching the television coverage from Egypt and I was struck by the way the protesters were very passionately singing the Egyptian national anthem.”

Are there any really bad anthems, musically speaking? “You can fall into a big patronising hole by saying ‘There’s a bunch of anthems where they obviously don’t know what they’re doing’, but then when you listen to music from that particular place, they do. I was in a Middle Eastern country recently and their anthem doesn’t appear to make any sense harmonically, but then when you hear the local music it totally does.”

In the control room at Abbey Road, which looks down over Sheppard and the LPO as they work their way feverishly through more than 30 anthems a day, a large map of the world is being covered with stickers as the anthems are ticked off. Each is methodically identified by a three-letter code, such as RSA for Republic of South Africa, RWA for Rwanda or NCA for Nicaragua, to ensure that no country is assigned the wrong one (this has happened in past Olympics, apparently, to explosive effect).

Sheppard has had long experience of composing movie and television soundtracks (his credits range from David Starkey’s Channel 4 series Henry, Mind of a Tyrant to the forthcoming documentary Bobby Fischer Against the World), and is accustomed to “tight, nasty deadlines”. Just as well, really.

“This was like doing six feature films at the same time in a very adrenalised state, but that’s fun,” he says. “But there are a lot of issues to deal with. These are pieces which have to last between a minute and 90 seconds, so you don’t have the luxury of a sonata or song structure where you can go to a counter-subject or a chorus. You just have to say ‘Here’s the theme, here’s a bit of contrast, bang – is the flag up the pole yet?’ ”

His brief was a mixture of imaginative latitude and tight restrictions. “I’ve been very careful with the German anthem, because who am I to change Haydn’s harmony? But with the American anthem, I’ve thought ‘We all know which chords go there, but what if we went down this different road?’ How that will go down I don’t know.”

Considering that after the recording sessions are completed, each anthem must be submitted to its relevant country for approval, Sheppard seems astonishingly sanguine about the whole process. He could find himself facing weeks of rewrite hell. But the 2008 experience of reworking the British anthem seems to have fortified him.

“I felt we couldn’t do anything too militaristic or imperial in Beijing, because they’ve kind of got that covered over there, so I did something I felt was more British. Then we had to send it to Buckingham Palace on a CD. It was a very middle-class spy exchange – we handed over the CD outside Waitrose. Then it was taken away and played to the Queen.”

Happily, the monarch approved. We must hope that the remaining 204 presidents, potentates, princes and prime ministers are equally accommodating.

Bhutan “An incredible piece of music,” says Philip Sheppard, “probably the most foreign, ethnic and remote to our Western ears. All I had to go on was an obscure field recording of somebody singing it in a temple unaccompanied. All I’d got was the melody, which left me completely free.”

Aruba “Aruba is in the Dutch Antilles, and those islands have five anthems. Aruba has a beautiful little waltz – not in a million years would you think it was an anthem. It’s lovely when a country goes off the map like that – it’s as if they haven’t read the book on what an anthem should sound like, and it really stands out.”

Montenegro “It’s violent, beautiful and brash. Somebody described it as ’Darth Vader’s wedding music’, which is about right. It sounds like Janáček on a really angry day. If somebody invaded your country and they were playing that music, you’d give up pretty quickly.”