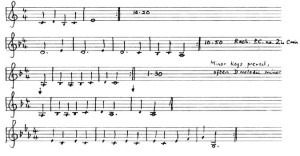 The sheet music of a 66-year-old woman’s musical hallucinations. Researchers reported that her daily hallucination sequences were each two to four bars in length, with each being repeated for periods lasting tens of minutes.
Credit: Sukhbinder Kumar

In 2011, a 66-year-old retired math teacher walked into a London neurological clinic hoping to get some answers. A few years earlier, she explained to the doctors, she had heard someone playing a piano outside her house. But then she realized there was no piano.

The phantom piano played longer and longer melodies, like passages from Rachmaninov’s Piano Concerto number 2 in C minor, her doctors recount in a recent study in the journal Cortex. By the time the woman — to whom the doctors refer only by her first name, Sylvia — came to the clinic, the music had become her nearly constant companion. Sylvia hoped the doctors could explain to her what was going on.

The doctors invited Sylvia to volunteer for a study to better understand the condition. She agreed, and the research turned out to be an important step forward in understanding musical hallucinations. The scientists were able to compare her brain activity when she was experiencing hallucinations that were both quiet and loud — something that had never been done before. By comparing the two states, they found important clues to how the brain generates these illusions.

If a broader study supports the initial findings, it could do more than help scientists understand how the brain falls prey to these phantom tunes. It may also shed light on how our minds make sense of the world.

“I think this is a sweet paper and an important one,” said Oliver Sacks, a neurologist whose books include “Hallucinations” and “Musicophilia.” “It’s a new way of looking at things.”

Dr. Sacks added that the conclusions of the study could only be preliminary, because it was based on a single person. But the same method may work on other people with musical hallucinations. “I think it’s a very good protocol,” Dr. Sacks said.

The study was based on a simple idea. Sometimes people with musical hallucinations say that hearing real music can quiet the imaginary tunes. Researchers had already found that they could use a similar method to mask tinnitus, in which people have a nagging ringing in the ears.

“The idea came to us, why not try masking music hallucination?” said Sukhbinder Kumar, a staff scientist at Newcastle University and one of the study’s co-authors.

It turned out that Sylvia found that music by Bach sometimes eased her hallucinations. When Dr. Kumar and his colleagues measured the effect in their lab, they found a consistent pattern: once the Bach stopped, Sylvia had several seconds of total relief from the hallucinations. Then the hallucinatory piano gradually returned, reaching full strength about a minute and a half after the Bach ended.

Dr. Kumar and his colleagues wondered what they would see if they measured her brain activity as her hallucinations rebounded. Brain scans in the past have only yielded murky clues about musical hallucinations, for a variety of reasons.

One problem has to do with how the studies have been designed. Scientists compare a group of people with normal hearing with another group of people who experience musical hallucinations to see if there are any significant differences in their brain activity. All the variations in each group may blur the evidence for how the hallucinations arise. Sylvia, by contrast, offered Dr. Kumar and his colleagues an opportunity to essentially switch hallucinations on and off in a single brain.

For their experiment, Sylvia put on earphones and sat with her head in a scanner that detects the magnetic field produced by the brain. On the day of the study, she was hearing selections from Gilbert and Sullivan’s “H.M.S. Pinafore.”

Every few minutes the scientists would switch to Bach for 30 seconds, to tamp down the hallucination. When the real music stopped, Sylvia pressed numbers on a keyboard to rate the strength of her hallucinations while the scanner recorded her brain activity.

Dr. Kumar argues that these results support a theory developed by Karl Friston of the Wellcome Trust Center for Neuroimaging. (Dr. Friston is a co-author of the new study.) Dr. Friston has proposed that our brains are prediction-generating machines.

Our brains, Dr. Friston argues, generate predictions about what is going to happen next, using past experiences as a guide. When we hear a sound, for example — particularly music — our brains guess at what it is and predict what it will sound like in the next instant. If the prediction is wrong — if we mistook a teakettle for an opera singer — our brains quickly recognize that we are hearing something else and make a new prediction to minimize the error.

Scientists have long known that people with musical hallucinations often have at least some hearing loss. Sylvia, for example, needed hearing aids after getting a viral infection two decades ago.

Dr. Kumar’s theory could explain why some people with hearing loss develop musical hallucinations. With fewer auditory signals entering the brain, their error detection becomes weaker. If the music-processing brain regions make faulty predictions, those predictions only grow stronger until they feel like reality. “There is nothing from the senses to constrain them,” Dr. Kumar said.

Dr. Kumar and his colleagues are now using their experimental method on more people with musical hallucinations.

If the theory holds up in further research, it could explain why real music provides temporary relief for musical hallucinations: the incoming sounds reveal the brain’s prediction errors. And it may also explain why people are prone to hallucinate music, and not other familiar sounds.

“Music is more predictable,” said Dr. Kumar. “That makes it more likely as a phenomenon for hallucinations.”