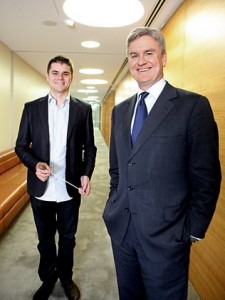 WHETHER you run a bank with more than 500 employees or an orchestra, managing human capital is about respect and authority. And that’s irrespective of your age, experience or specialty.

Credit Suisse chief executive David Livingstone has been in banking for more than 20 years and since joining the company in 2007 has been part of many mentoring relationships with junior management. But until now none had included as foreign a field as conducting music.

In the past six months Livingstone has shared his wisdom and experience with the talented Nicholas Carter who, aged only 25, is taking on the first associate conductor role with the Sydney Symphony, financially supported by Credit Suisse in a new philanthropic relationship.

The two men meet monthly to discuss their respective challenges and it seems the fundamentals in being an effective manager are constant across all variables.

After 16 years in senior management, Livingstone believes one of the most important factors in creating a successful team is to acknowledge that you can’t do everything on your own. “Nothing we do in our world is achieved by one person alone,” he says. “You have to learn how people operate within teams and get the best out of them, even if the end product is fundamentally different.”

As one of the youngest conductors to lead the Sydney Symphony, Carter thinks his biggest challenge has been to gain the respect of a team of older and more experienced musicians. “To command a rehearsal room requires an enormous amount of authority. To do that as a young conductor without coming across as arrogant is a difficult line to walk,” he says. “You need to do the job just as well as someone who is older than you, but you must accept you still have much to learn.”