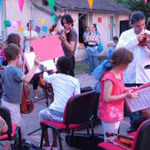 Taught to play instruments in just six months, children from the banlieues are set for a prestigious Paris debut.


The French summer has had a disastrous beginning. After the French team crashed out of the World Cup in disgrace, commentators accused overpaid footballers of being badly brought-up children from poor areas and claimed national unity was dead. Each week seems to bring a new ministerial scandal. With only the prospect of a long August holiday to cheer them up, the French will have to look elsewhere to find racial integration and social success.

Perhaps they could start at a large hall on the outskirts of Paris, where around a hundred children of all races and colours are waiting for the conductor’s baton to fall. “Tutti please, that means everyone!” The trumpets come blaring in with the first bars of Tchaikovsky’s Russian Dance from The Nutcracker. At the back of the violins, a girl with beaded braids looks bemused. The little blonde boy next to her leans over to point out where to begin.

Six months ago none of these children had played a musical instrument. Now, they are a handful of rehearsals away from performing in the prestigious Pleyel Hall in central Paris, sharing the month’s bill with the violin superstar Anne-Sophie Mutter and the London Symphony Orchestra.

The concert is the culmination of the “Demos Orchestra” project, an ambitious scheme which took 450 children aged seven to 12, living in disadvantaged areas of the Parisian suburbs, and taught them to play an instrument from scratch through four hours a week of group work.

The project is about more than teaching music. It is also about rehabilitating the image of the banlieues, the stigmatised suburbs around Paris that the French associate with the violent youth riots of 2005, criminal gangs – and now the collapse of the national football team (many of whom were born in troubled banlieues).

“The comments (blaming banlieue culture) for France’s failure in the World Cup are complete rubbish,” protests Olivier Flament, the project manager of Demos. “We’re showing that these children are exactly like any others. But if they don’t have the same opportunities, of course, they’re going to be disadvantaged.”

Most of the children come from areas in the suburbs classified as “sensitive” or “educational priority” zones, with high levels of council housing, unemployment and crime.

The name “Demos” was chosen for a reason. “We want to democratise culture,” explains Mr Flament. “One music conservatoire has 500 places in a town of 100,000. Of course, only the well-off families get their children in. Many of the others don’t even know what a conservatoire is.”

The Demos children were divided up into groups of 15, each taught by musicians from top Parisian orchestras and conservatoires and supervised by an educational specialist. Each group was assigned an instrument type – strings, woodwind or brass – and every child was given their own instrument to take home and practice on.

For the Pleyel concerts, the groups have been assembled into four orchestras. Thanks to a special four-level arrangement of well-known classical works created in partnership with the London Symphony Orchestra, the teachers will play along too, as well as a dozen conservatoire pupils who have been mentoring the children.

In a way, the project is also a social rehabilitation of classical music. “In these disadvantaged areas, there’s been a lot of work with rap and traditional music, but classical music is far removed,” Mr Flament said.

Gabriel Guillaume works at the Léopold Bellan Children’s Home, one of the social structures participating in the project. “It’s opened up their access to culture. They’ve visited the Opéra Comique and learned about classical composers. I can put on a CD of Mozart now and then and no one says yuck,” he said.

“But they all dance to Michael Jackson,” adds Eduardo Lubo, the cellist who has been guiding the Bellan group along with his brother José. The brothers previously worked for the Sistema Foundation in Venezuela, the main inspiration for Demos. Since 1975 the foundation has taught more than 250,000 children from poor backgrounds to play music, and launched the international career of conductor Gustavo Dudamel.

It is a sunny evening and the Bellan group is putting on a performance for their parents. Ryan, a little Cameroonian boy, seems to be paying tribute to Michael Jackson with his silver cape and black bowler hat. In the audience of proud parents are colourful African headdresses and Brazilian football shirts. Lady Gaga blares from the speakers as balloons burst and children with painted faces hurtle around.

But the moment the youngsters start playing concentration is absolute. Violins, violas and cellos are gripped tightly. While José plays the melody, the children accompany him with easier tunes. There’s a slight wobble in the middle where the violas stop and gaze worriedly at their neighbours, but everyone manages to finish together to a standing ovation.

The Demos Orchestra hasn’t just helped the children to overcome musical boundaries, but social and racial barriers too. Eduardo Lubo also teaches groups in more volatile neighbourhoods. “In one area there are two groups of council flats with just a courtyard in the middle. The two communities don’t mix, it’s like water and oil. But now the children see each other all the time. They’ve realised they have something in common. With Demos they can say this is my gang, my community. They all have a common imagination, whether they’re from Portugal or North Africa or wherever.”

Laurette worked at the children’s home last year. She’s surprised to see a certain little blonde boy sitting at the front of the violins, bowing determinedly. “He was always a dreamer, only TV or computer screens could hold his attention. He struggled to interact and play with others.”

“There’s solidarity”, adds Mr Guillaume. “At the beginning they struggled to listen to each other and play together. Now it’s no longer a problem.” And the children seem to be thriving as individuals, too. Being chosen to take part in the project relied on enthusiasm. There were no artistic criteria, no auditions. The children were just asked one question – do you want to play music? And if the answer was yes, then they were taken on.

The approach seems to have paid off. Four hours of lessons a week may seem a lot to ask of beginners, but according to the project manager, Mr Flament, the drop-out rate was only 15 per cent, “much lower” than for other cultural projects he has been involved in. José Lubo noticed a growing enthusiasm in his groups. “At the beginning they were never on time, they wanted to leave early, then something clicked and they didn’t want to leave, we were staying half an hour extra sometimes.”

Damien, 9, is still wearing his judo uniform. He runs over to chatter excitedly to the Lubo brothers. “It’s easier playing on my own,” he admits, “but it’s really fun playing with José.” Then he rushes off to continue the party. Many of the children have difficulties with reading or concentration at school. While the French conservatoire system is very focused on musical theory, Demos teaching began aurally so all of the children could follow.

The musicians played simple notes for the children to copy, without using technical terms. Written music was only introduced a few months later. “They’ve managed to transfer the skills they’ve learned through Demos,” says Mr Guillaume from the Léopold Bellan Children’s Home. “Attention, concentration, but also self-confidence. One little girl had difficulties at school, hang-ups. She’s been able to get over them because of her new confidence. The teachers asked them to talk about the orchestra at school, and that changed the way their teachers and classmates see them. They’re no longer stigmatised.”

As cellist Eduardo Lubo puts it: “They realise they’re not so rubbish after all”. The Demos project may be about more than musical excellence, but the final results are pretty impressive. Mr Blachier has three children in the home. He’s at a loss for words. “Really… wow. They’ve done that in a few months… the parents are all blown away, we thought it was just a hobby. It brought tears to my eyes.”

The Demos project may not yet be at the level of its Venezuelan cousin Sistema, but it has shown up the blind spots of the French cultural and social landscape. The project will continue again in September for a second trial year, and the organisers are hoping most of the children will stay on.

Laurent Bayle, director of Paris’ “City of Music” and co-organiser of Demos, is optimistic. “Not all of the children will go to a music school but doors have been opened for the most motivated. The others have been able to experience a world which was completely foreign to them.”