Media
Orchestra of the Age of Enlightenment’s ‘The Night Shift’ a hit with younger audiences
October 19th, 2016
Tags: orchestra, society 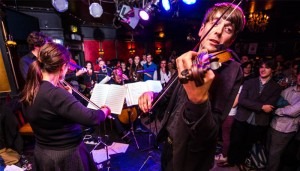 It might be one of the world’s leading period instrument orchestras, but Orchestra of the Age of Enlightenment (OAE) is also one of the most innovative. Since 2006, it has been running a series of casual format late night concerts which it calls ‘The Night Shift’. Beginning typically around 10 pm, these are hour-long, low cost performances in which listeners can bring a drink and hear the orchestra playing in more relaxed circumstances. People are free to talk and clap as they like, and support acts and DJs vary up the program.

Billed as ‘Classical music: minus the rules’, The Night Shift has become a striking success, especially with younger people. Two years after the series began, The Guardian’s Tom Service put the audience age at under 35 and was surprised at the lively atmosphere he encountered. Full story.