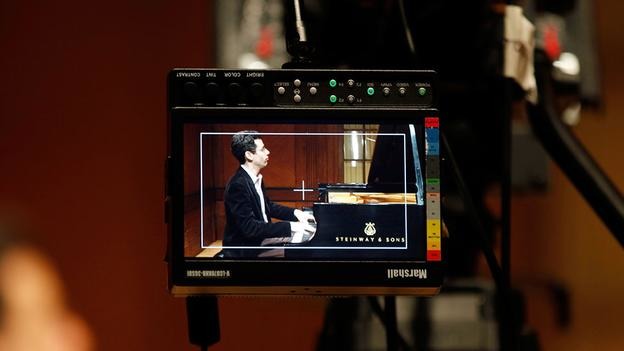 One of the world’s most elite music academies is offering courses online – and thousands of people of different musical abilities are signing up. Can web learning make classical music accessible to all? Clemency Burton-Hill investigates.


Ah, September: eternal month of new pencil cases, clean textbooks and butterflies in the tummy. No matter how old I get, this month will forever tingle with the anticipation of a new school term and all its promise, excitement and potential tedium.

This autumn, though, millions of people around the globe will be going ‘back to school’ without leaving their front doors. Few recent trends have caught on quite like online education, which is rising at a staggering rate. The hundreds of free courses offered by elite universities on ‘tech-ed’ sites like Udacity, edX and Coursera seem to herald a future in which world-class education becomes available to anyone with a reasonable broadband connection and a desire to learn. This summer The Economist suggested that the Massive Open Online Course (Mooc) is shaking the foundations of academia’s “ivory towers”; the New York Times reckons we are living in “the year of the Mooc”; and a survey by the Sloan Consortium found that enrollment in online education enjoys a 21% growth rate, compared to the paltry two per cent in higher education overall.

So far, most of those courses cover mainstream academic subjects, with a notable bias toward science, mathematics and business. Udacity currently offers only courses in business, computer science, design, mathematics and science. But, given the high expectations that the Mooc movement will democratise education, it’s intriguing to think of the barrier-breaking impact it may have on seemingly ‘specialist’ arts subjects like classical music.

At the moment there is not much to choose from in this area. edX offers a course on Music in the 20th Century that starts next week – but as if all that Schoenberg, Ligeti and Xenakis weren’t baffling enough, the course is run by Peking University and is taught in Mandarin. Coursera, however, has partnered with one of the world’s great music conservatoires to offer something a little less intimidating: Exploring Beethoven’s Piano Sonatas, taught by the pianist Jonathan Biss of Philadelphia’s Curtis Institute. As the most selective higher-education institution of any discipline in the US, Curtis’ student body is tiny: around 40 students each year graduate from the academy – including the likes of Lang Lang. So what happens when you fling open its doors to the world wide web?

“I expected maybe 500 people to sign up,” Biss, himself an alumnus, tells me from his home in New York. “This was such a new venture for me, for Curtis, and for Coursera, which has never partnered with a music conservatoire. We had no idea what was going to happen.” He gives what sounds like an astonished chuckle. “So I have been absolutely floored.”

To date, more than 35,000 people have signed up for his five-week Beethoven course. That is almost ten times the number of Curtis Institute students there have ever been since the school was founded in 1923. “The ideal of open and free education is totally in line with our mission at the school,”says David Ludwig, Dean of Artistic Programmes. “Curtis is unique because there are no tuition fees: it is based on merit alone. So the core idea of educating people regardless of their means is exactly what we’re about.”

Biss tells me he designed the syllabus “for everyone”: from those who may have played all 32 Beethoven sonatas to those who had never even bashed out a C-major scale. “My dream student,” he admits, “was someone who has heard the music and been in some way turned on by it, but who has never had the opportunity to delve any deeper.” The tens of thousands of students who have signed up appear to come from widely diverse backgrounds, and are a range of ages, nationalities and levels of musical experience.

All this seems to fly defiantly in the face of the common refrain that interest in classical music is on the wane and that audiences are aging to the point of no return. “We’re so used to hearing that the sky is falling in, so this incredibly redemptive,” says Ludwig, who will teach a Coursera course later this autumn on the history of Western classical music. “We know that the world is changing, and classical music has to react to some challenges, but fifty thousand people have signed up so far for the two courses. This is actually a really exciting time to be in classical music, and I’d love for people who have absolutely no idea what a treble clef is to come and engage. This really is a game-changer.”

Some commentators are less convinced. Mooc-sceptics like Time magazine’s Andrew J Rotherham argue that “there is scant evidence that technology is improving learning” and that the best an online product can do is “augment live teaching”. But while this may be the case in an organic chemistry class, it seems to be beside the point for the music courses in question. Most would not otherwise have the option of attending a Curtis class, so anything they learn on these courses is a major bonus.

Moreover the online model, Biss reckons, addresses one of the most depressing things about the perceived elitism of classical music: the supposed barriers to entry. “It breaks my heart a little bit every time I hear someone say ‘oh, I love hearing classical music, but I don’t understand it’”, he says. “Nobody should be afraid just because they haven’t studied it. To be able to listen to classical music, all you have to do is be able to feel. But we all have a tendency towards shame at what we don’t know, and that might make someone reluctant to take a course if their lack of knowledge was at risk of being exposed. One of the things about the internet is, if you choose to, you can be truly anonymous, so there’s a safety in this model that is specific to the culture of the web.”

As anyone who has ever read an online comment thread knows, that very anonymity means that there sometimes lurks, in the so-called ‘bottom half of the internet’, the very worst of humanity. “But sometimes the best too!” Biss counters. “And what we’re already seeing in the comment threads for the course, which are yielding some amazingly intelligent discussions, are that those with more knowledge are sharing that with those who have less.” Later, I check and see that almost a thousand people have posted comments so far; there is not a single troll among them.

One of those students is Lauren Hirsch, who learned the piano from the age of six to sixteen but has had “a 25-year hiatus”. When I ask her why she thinks the course is so successful, she tells me that the material is clearly and simply presented, “with a tone that – let’s just say – classical music sometimes struggles to achieve.” And the format is key:  if the course were anything but virtual, Hirsch says she would not “indulge” herself the time to explore it. “Without the pressure or physical commitment, the idea of tackling subjects that are not directly related to your career or prior education seems much more reasonable,” she points out. Hirsch too has been struck by the “sheer number of people taking the course who don’t know anything about classical music other than Beethoven’s name. The great advantage to a format like this is that it couldn’t be less intimidating.”

I wonder, though, about the potential downsides. How, for example, do you make a course that is by definition “massive” feel as intimate as even a draughty lecture hall? “It’s a bit like the experience of recording a piece after playing it in concert,” says Biss. “There’s no denying that the audience is not there in front of me in studio, but you learn to imagine the audience.”Last week he posted on the course forum that he’d be in Philadelphia’s Café L’Aube at noon on Thursday and anyone local was welcome to join him. He expected a handful to show up, if anyone. More than thirty real people turned up and they filled the café –“talking about Beethoven, without a lull”, for over an hour. “This is so outside the realm of what I thought was possible,” he laughs. “Just to see the level of passion for this subject matter among people I didn’t even know existed.”