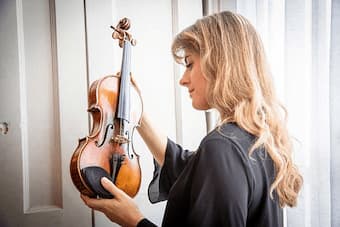 When Niccolò Paganini, around 1802, needed a powerful new violin, he found (or was given) an instrument by Guarneri del Gesù. It had been made in 1743, near the end of the great luthier’s career. Paganini called his new instrument “Il Cannone” (the Cannon) and used it for the rest of his life. After his death, it was given to the city of Genoa, where it is exhibited in the town hall.

Il Cannone has its original neck (though it was extended and reset into the body at some point in its life), the plates were never re-graduated, and the instrument has never been polished. The Sala Paganiniana, where Il Cannone resides inside the Palazzo Tursi, is monitored by scientists, experts, and bodyguards. The instrument is played monthly by curator Bruce Carlson and each year by the winner of the Premio Paganini contest for young violinists. Full story.