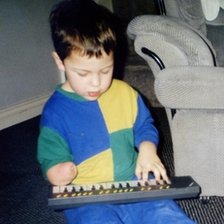 As a teenager seeking his first place at a school for young pianists, Nicholas McCarthy was refused an audition and told he would never succeed.

Having one hand, the head teacher told him, would always hold him back and it was better not to waste his and other people’s time.

While some might have given up, Mr McCarthy went on to become the first one-handed pianist known to have graduated from the Royal College of Music.

Of the early audition, he said: “It was soul crushing because that’s all I wanted to do.

‘How is this possible?’

“I could feel it would be an uphill struggle, but it made me more determined, I’m quite a stubborn character.”

The 23-year-old from Tadworth, in Surrey, was born without his right hand.

He taught himself to play an electric keyboard as a young boy, but did not start piano lessons until he was 14.

Mr McCarthy said he had planned to become a chef but changed his career path the moment a friend played him a piano sonata by Beethoven, which “dumbfounded” him.

At the age of 17 he secured a place at the junior department of London’s Guildhall School of Music and Drama, winning the annual piano prize.

He then went on to the prestigious Royal College of Music in London, graduating last month.

The college’s head of keyboard, Prof Vanessa Latarche, said her pupil had been “incredibly enterprising” in overcoming some big challenges such as developing the stamina to present a 50-minute recital with one arm.

“He has been a great inspiration to many of his fellow students in showing what it is possible to achieve with a disability,” she said.

Mr McCarthy is a member of Britain’s first disabled orchestra – the paraorchestra – which played to paralympic athletes last month to welcome them to London.

“When I first joined the orchestra, a couple of the musicians who are partially sighted and blind didn’t believe I was playing with one hand, that was a big compliment to me,” he said.

“The music is all written for the left hand alone, I’m not changing anything, I’m playing the music as it was written.

“It’s written very cleverly, but you’ve got to be very quick and good with the pedalling to sustain the bass notes while playing the top notes.”

Ravel, Prokofiev and Bartok are among the composers who have written pieces for just the left hand.

Mr McCarthy said he thought a lot of people came to see him perform “for curiosity and think ‘how is this possible?'”

“For many, the first reaction is astonishment, that wow factor. I’ve had some people who thought I’d played with a backing track, but it is just me and my left hand.”

Next week he will perform in Malta at the offices of the country’s prime minister and in September he will headline his first evening concert at Fairfield Halls in Croydon.

Mr McCarthy’s self-determination and belief were instilled in him from an early age by his non-musical parents Ray and Julie.

Salesman Ray, 46, said he always let his son do things people said he could not do.

He said his son was one of the first among his peers to ride a bike after he adapted it to put both brake levers on the left-hand side.

“You can allow to be defined by society, by colour, race, creed or disability, but if you decide you’re not going to, the world’s your oyster,” he said.