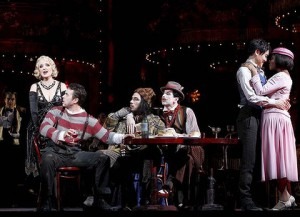 Australian style ... a scene from Gale Edwards' Melbourne production of La Boheme, which is about to open in Sydney.

Lyndon Terracini is tackling some big challenges, so it helps that the man charged with dragging opera into the 21st century can discuss rugby league and the Ring Cycle with equal authority, writes Elicia Murray.

The fat lady has sung. And if Lyndon Terracini continues to get his way, she won’t get an encore until she at least shifts some weight.

Lest the man charged with overseeing the future of opera in Australia be accused of sexism, he is quick to point out that his shape-up-or-ship-out message applies to all performers, regardless of gender.

”If you’re seeing a couple making out and one of them is obese, who wants to watch that?” he says with a theatrical grimace. ”It’s obscene. You just think, ‘Jeez, for Chrissakes, don’t let the children see that’.”

Terracini’s views on how performers should look will outrage some and surprise others who still associate opera with super-sized sopranos in body armour and viking horns. But for the artistic director of Opera Australia, who next month unveils the program for his first season, that’s exactly the point.

If casting ”triple threats” who can sing, act and look good helps spark an interest among people who think opera is only for the old and rich, then he makes no apologies for upping the unemployment rate of overweight singers.

”You go to a movie and you see people who look exactly right for that role,” he says. ”They’re consummate actors and they’re completely involved in what they are doing, so their performance is totally believable.

”That’s what I’d like in opera: for people to be fabulous singers, look wonderful and be completely and totally absorbed in their character. If you can’t get off the seat, if you’ve got to sit on a rock all night, who believes that?”

Terracini, 61, enjoyed a successful career as an opera singer before shifting into arts administration. His speaking voice retains a velvety richness that hints at the baritone power beneath, and although it has been six years since he appeared on stage, he still has a showman’s flair for delivery.

Since his appointment in 2009 it has become Terracini’s mission to make a style of musical theatre created to entertain Italian court audiences four centuries ago relevant to 21st-century Australians. ”I think in classical music we can become so religious about protecting the past that we cease to see the possibilities for the future,” he says.

Terracini brings a combination of artistic and administrative experience, having sung in Australia and overseas, including an eight-year stint in Italy, before running the Queensland Music Festival and the Brisbane Festival.

His vision extends beyond how his stars should look, embracing structural, technological and financial aspects of how the national opera company should operate.

Before he was appointed, the company was in turmoil. Mezzo-soprano Fiona Janes had accused the former Opera Australia musical director, Richard Hickox, of leading the company into ”an abyss of mediocrity”, a view publicly supported by a group of disgruntled artists and patrons.

After Hickox’s sudden death in late 2008, the board reviewed its management structure, reintroducing the role of a full-time artistic director to work with the chief executive and conductor.

Terracini says that opera once drove innovation on stage and he wants it to reclaim some of that creative ground.

He recently launched Opera on Sydney Harbour, which will debut in March, with an $11.5 million production of La Traviata on a floating stage off Mrs Macquarie’s Point.

”I’m not saying we do this for every opera but there will be single examples of presenting opera a very, very different way, so that we are identifying as far as possible the many opportunities for what an opera company can be in the 21st century,” he says.

The harbour launch featured holograms and the company is exploring the potential of what Terracini calls ”hologramatic” sound, which promises a richer, more immersive aural experience.

Opera Australia has followed the New York Metropolitan Opera’s lead with high-definition filming of its productions, making opera accessible for the price of a movie ticket. Next year, there will be discount tickets to shows for children and family groups.

Terracini, who grew up on Sydney’s northern beaches – ”I was the only wog surfer at Long Reef, Dee Why and Freshwater” – acknowledges the challenge. (While he was ridiculed for his Italian-sounding surname at school, he is a fourth-generation Australian who only visited Italy for the first time aged 30.)

In an effort to build stronger ties with western Sydney, a new community choirs program will teach opera to singers from the suburbs. If all goes to plan, they will then come together to present a free concert at the Opera House.

”If they like it and want to continue to participate, that’s fantastic.” Terracini says. ”I don’t want to be evangelical about this. I grew up in the Salvation Army, so I know all that stuff backwards, but I do think it’s important for as many people as possible to have as many artistic and cultural experiences as possible and they make their own choices.”

Out of this cross-pollination with different cultures and music styles, Terracini hopes a new Australian aesthetic will emerge, one where local identity is paramount, an irreverent sense of humour is prized and the opera that comes out of Europe or the US is not automatically viewed as superior.

”I’ve been to operas in Europe that had shit acting, shit singing and were shit productions,” he says. ”Opera Australia performances are of a much higher standard than a lot of those supposedly important opera houses.”

He believes Australia’s outdoor lifestyle makes our performers more gregarious and less inhibited. If those qualities can be amplified on an operatic stage, he hopes the results will appeal to audiences overseas, too.

He cites last year’s production of Bliss, directed by Neil Armfield, and Gale Edwards’ production of Puccini’s La Boheme, about to open in Sydney after a successful Melbourne run, as examples of what this Australian style might be.

Terracini breaks into song describing a scene in La Boheme where four male characters embrace. ”Eh buona sera,” he booms, arms outstretched. ”It’s as though they’re in a rugby scrum. You feel that warmth coming from the stage.”

The rugby reference is apt. His conversation is filled with sporting references and he once invited premiership-winning rugby league coach Wayne Bennett to give a pep talk to the Queensland Orchestra.

He has praised AFL boss Andrew Demetriou’s efforts to expand the game into western Sydney and wants opera audiences to look more like ”the crowd at Bulldogs rugby league matches and less like the Australian cricket team”.

”I don’t think we’ve seen his indi-vidual stamp yet,” he says. ”Yes, there’s Boheme, but we’ve seen good Bohemes before, notably the Baz Luhrmann one.”

As for the artistic director’s views on how singers should look, McCallum warns Terracini is on dangerous ground. ”It’s really hard to cast opera – to get the voices people want and people who look great as well,” he says.

”There are plenty of fantastic Asian singers around and we don’t mind casting them in the big roles of Italian lovers or La Boheme, and there are some fantastic female black singers who have played Madama Butterfly. There’s got to be a suspension of disbelief … after all, what is a Valkyrie supposed to look like?”

Terracini will announce the contents of his first season next month. The company has already signalled its desire to stage a season in Brisbane next year and a $16 million, four-opera Ring Cycle is planned for Melbourne in 2013.

Director Benedict Andrews is working on a new version of Mozart’s The Marriage of Figaro (which Opera Australia previously postponed due to budget concerns), and there are workshops under way to develop new work with classically trained musicians employed in different professions, including advertising, comedy, film and cabaret.

Terracini says 2012 will be ambitious, contemporary and challenging, building on the notion of Australian identity.

While his programming choices will no doubt ruffle feathers, perhaps nothing will shock subscribers like his role in Peter Greenaway’s 1993 opera Rosa – a Horse Drama.

Terracini played a composer who shuns the affections of his beautiful young fiancee, preferring to make love to his black mare, Bola.

”It was pretty out there,” he says, grinning. ”You wouldn’t hope to have a piece like that every year and maybe that sort of subject matter is becoming a bit passe now. But to have a piece that really grabs the public’s imagination and still have extraordinary music and everything working at absolutely the highest level, that is an exciting thing.”

THE names Takesha Meshe Kizart literally mean, in order, ”highly favoured”, ”saviour”, ”miraculous”. The Chicago soprano, who will perform the role of Mimi in La Boheme, has been hailed as the ”next great Verdian voice of her generation”.

She is slim with cover-girl good looks but she had to work at it. ”I had bad teeth, wore glasses until last year and had a bad walk,” she confesses. ”A dentist fixed the teeth, I had laser surgery on the eyes and modelling fixed my walk.”

Kizart was two when she first sang in public. She wanted to join her elder cousins in the children’s choir at a Chicago church but was deemed too young.

”My mother went to the pastor and he said, ‘If she wants to sing, let her sing’.” The outstanding voice was apparent from the beginning. ”My voice has always belied my physicality,” she says, ”much larger than people expect.”

The singer was pleasantly surprised recently to discover she is the grand-niece of Tina Turner. ”I was speaking to my grandmother, my mother’s mother, when she mentioned it in passing and I was like: what!” Another relative is the late McKinley Morganfield, known as Muddy Waters, father of modern Chicago blues. ”All those forms of music – rhythm and blues, jazz, rock, soul music – they are innate with me,” she says.

It was the music teacher at high school who first spotted her potential but her operatic career solidified only in 2008 when she became artist-in-residence at the Academy of Vocal Arts in Philadelphia.

”Opera takes more than just talent,” she cautions. ”There are plenty of talented people at home right now sitting on their couches complaining about the person they are looking at on TV. It takes more than talent. You have to strive to be the best.” – Lawrence Money