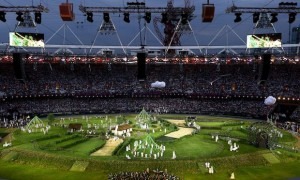 To American TV audiences, the sounds of the Olympics are the regal trumpet fanfares of John Williams’s Olympic Fanfare and Theme and Leo Arnaud’s Bugler’s Dream.

But in fact, classical music has played a role in the Olympics for more than a century. The games have found a place for composers as diverse as Richard Strauss, Dmitri Shostakovich, Philip Glass and Josef Suk. The opening events rely on music, award ceremonies always feature national anthems, and for some events, such as gymnastics and synchronized swimming, music is an essential ingredient in the routines. But as marriages go, it has been a rocky one at times.

The ancient Greeks held Olympic games every four years. There was wrestling and racing and discus throwing – as well as plenty of music. Singers received prizes for hymns composed for the games; trumpets summoned athletes to the field; flutists accompanied the pentathlon. Dedicated to Zeus, the pagan games were eventually suppressed in the name of spreading Christianity – but they remained a potent symbol of the athletic and artistic achievements of Greece.

More than a thousand years later, in 1896, a music-loving Frenchman named Baron Pierre de Coubertin envisioned an Olympic revival that unified the arts and sports. “Pierre de Coubertin, who was the founder of the modern Olympics, wanted to capture the idea of the Olympics not only being a competition of the body, but also of the mind and the spirit,” said music historian William Guegold, author of the book 100 Years of Olympic Music. “I’m pleased that Pierre de Coubertin’s philosophy that the arts and music still be part of this event in some way is still prominent.”

In 1894, Coubertin convened an international congress in Paris to discuss a new Olympic competition. Four years later, he watched proudly as the first modern Olympic games opened in Athens with the Olympic Anthem, a choral work by Spyridon Samaras.

Judging was a regular problem in the arts competitions, says Guegold. To be eligible, composers had to be amateurs, just like the athletes. “The really great musicians and composers of the time seemed to want to serve on the adjudication panel instead of writing the pieces, and they probably wouldn’t qualify anyway because they couldn’t be considered amateurs,” he said.

In 1932, the single award of a silver medal damned with faint praise the most famous of all Olympic music competitors, the Czech composer Josef Suk. It was for this piece, his patriotic march called Into a New Life. It won a silver medal at the 1932 Summer Olympics in Los Angeles. Suk was probably the most famous winner of the Olympic arts competitions and his march is one of the few medal-winning pieces that’s survived.

The art competitions were abandoned in 1948. But by then, music had begun to acquire an important role in Olympic culture – in the opening ceremonies.

The most infamous example was the 1936 Olympics in Berlin. The Nazis pulled off a coup by commissioning no less a figure than Richard Strauss to write a hymn for the opening ceremony. The event began with a speech by Adolph Hitler, a cannon salute and the release of thousands of white pigeons. Strauss led the Berlin Philharmonic and the National Socialist Symphony Orchestra through his rousing Olympic Hymn.

Strauss made no secret of the fact that he despised sports and wasn’t much of a fan of the Nazis. But he saw the event as a chance to raise his own visibility, said Leon Botstein, the president of Bard College and music director of the American Symphony Orchestra.

“He wrote this Olympic Hymn really with his left hand,” said Botstein. “It’s not a great piece. It’s not memorable. It’s off-putting because it was played at the ‘36 Olympics, which was a kind of Nazi propaganda event. So everything around it and about it is distasteful and itself has a kind of unmistakable vulgarity about it. But it’s a way of understanding Strauss.

“The thing was well written in the sense that he was a craftsman,” continued. “But it’s important to remember that it existed. We sanitize our record of the past when we eliminate things about composers that don’t please us or don’t fit with our simplified image. This is a way of remembering what a composers’ vocation turned out to be under dictatorships and where collaboration and cooperation had its consequences.”

Botstein argues that no great music has been written for the Olympics or any sporting event for that matter. But there have been commissioned works. And with some four billion people watching, an Olympic commission is hard to turn down. Philip Glass wrote music for the Olympics on two separate occasions, starting with The Olympian, composed for the torch-lighting ceremony at the 1984 games in Los Angeles.

That piece may be a footnote in Glass’s canon but it represented a departure for him in 1984. At the time he was turning out mostly minimalist scores, full of chugging patterns and static washes of sound. The Olympian sounded different; it had a clear and stately theme, developed over the course of three minutes.

Glass wrote music again for the 2004 Athens Games. Other concert composers found an outlet in writing Olympic themes as well. In 1994, the organizing committee for Atlanta Olympics hired American Michael Torke to write a piece for the games.

Like Glass, Torke had to think in terms of grand gestures. “Rather than some show-offy orchestral effects thing I started thinking more thematic,” said Torke. “Could I find a theme that would inspire the idea of sportsmanship, of valor, of competition? I think that’s where the theme came from. And then when things got going and developed, and there was this rush of sound, it sounded like a spear being thrown through the air. And that’s where I settled in on javelin throwing, which is not one of the most popular features of the games, but I kind of like that.”

The ancient Olympics may have ended with a song by an eminent poet. But by the 1980s and 90s, the modern games were increasingly packed spectacles full of visual stunts and effects. In Los Angeles in 1984, a man flew into the arena using a jet pack and 84 pianists pounded out Gershwin’s Rhapsody in Blue.

In 1992 in Barcelona Freddie Mercury of Queen teamed up with soprano Monserrat Cabelle for “Barcelona.” Not to be outdone, the 1998 Winter Games in Nagano featured what was billed as “The performance of the world,” in which Seiji Ozawa conducted the finale to Beethoven’s Ninth Symphony with choirs in Beijing, Berlin, Sydney, New York and Cape Town, all linked by Satellite. And who could forget the Beijing summer Olympics four years ago, with 2,008 drummers pounding away with militaristic fervor, followed by the flamboyant pianist Lang Lang performing a melody from the Yellow River Concerto.

Roger Catlin is the former TV critic for the Hartford Courant and writes now for Salon.com. He says that the bar is continually being raised to accommodate flashier spectacles. But, he says, don’t look for great art in Olympic songs and anthems. “They’re usually the kind of songs they devise for ‘American Idol’ winners at the end of the season,” he said. “They’re over the top – about dreaming and reaching your goals. They’re really unnecessary once you see the video of the athletes who can pretty much conjure up those feelings by just watching what they do.”

For this reason, Catlin admires Arnaud’s “Bugler’s Dream” for its sheer simplicity.

“I think that’s the key for somebody who might want to do an Olympic anthem in the future – the idea of this lone bugler with this singular theme. It was something that was written not for the Olympics but came out in ’58 and it was at ABC when they had the Olympics.” Roone Arledge, the president of ABC Sports from 1968 to 1986, ran across the piece and decided to use it as the network’s Olympics theme, admiring its timeless style. “It has this classic sound to it – like it comes from the Greeks or something,” added Catlin.

Music in the Olympic Events

We all remember the image from 2008 of swimmer Michael Phelps with the distinct iPod earbuds planted firmly in both ears. Many athletes use music as a motivational tool. But for some events, music is essential to the sport itself. In the winter games, that would be figure skating. This summer, listen for classical music in the women’s gymnastics and synchronized swimming.

Tammy Biggs is the U.S. women’s coach. She says that due to changes in the game’s rules, there will be more classical sounds heard this summer. “Years ago it used to be just piano,” she explained. “Then it changed from piano to modern music. Then a lot of the modern music. But a lot of the modern music – even if you take the words out – doesn’t have what an orchestra has, what a symphony has – that strong feeling. So artistry at the Olympics is going to be very, very important.”

The U.S. gymnasts have a team choreographer who helps to choose the music, which this year will include everything from Phantom of the Opera to Armenian classical pieces.

And then there’s synchronized swimming. One of the Olympics’s most artistic and subjective pursuits, it’s often known for its frozen smiles and ubiquitous nose plugs. While the full U.S. squad failed to qualify this year, they will still have a presence, in Mary Killman and Maria Koroleva, who qualified as one of 24 pairings for the duets competition.

The team’s coach, Mayuko Fujiki, said that the pair will swim to John Williams’s familiar Olympic Fanfare and Theme, mixed in with some percussion rhythms and ending with Beethoven’s “Ode to Joy.” Some chanting of the Olympic motto will be mixed in for good measure.

Synchronized swimming may not be a sport appealing to the musical purist, but “when it comes to synchronizing we have to be able to count through the music. Most of the classical music is not countable or is a little too slow to count. Or you’re going to risk it by not being able to synchronize. So I think we’re trying to look for something different and these years everybody looks for a little different music than classical.”

The London 2012 games will end as they began, with a highly choreographed ceremony directed by Danny Boyle and combining the big-ticket rock and pop acts. Slated to perform are The Who and the Spice Girls as well as the London Symphony Orchestra.

Whether or not the games are a stage for classical music artistry, for two weeks, television audiences will have the sound of a symphony orchestra in their ears. The games themselves will also have a kind of musicality of their own. As Olympics founder Pierre de Coubertin said over a hundred years ago: “Sport must be seen as producing beauty through the architecture, the spectacles and the celebrations which it brings about.”