Media
Oh, those string players are so full of themselves
March 29th, 2013
Tags: orchestra 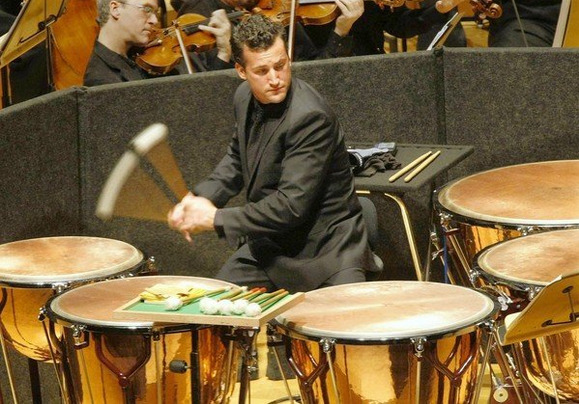 Yes, but what about the louts in the brass section? Orchestra members, so unified when on stage, enjoy poking fun at one another when off.

Insider jokes are not just for White House Correspondents’ Assn. Dinners or ESPN kibitzers or Academy Awards emcees. They also crop up in discussions about symphony orchestra musicians — a society unto itself. There are jibes and even sober-minded studies that characterize personality types according to the instruments they play.

Who are the string players? The divas.

What do you call oboists? The orchestra neurotics.

And the brass? Drunken bullies.

Concert hall audiences tend to believe that those hundred or so musicians onstage — all of them remarkable virtuosos — are never less than unified in their pursuit of artistic perfection. Or at least always appreciative of one another’s sections and manner of playing, even tolerant of a blasting decibel or vague pitch from nearby.

But instrumentalists easily affirm or puncture the stereotypes. Or laugh them off, with qualifications.

Consider Ariana Ghez, one of the most visible members of the Los Angeles Philharmonic because cameras at Hollywood Bowl concerts often fix on her, who says, “Yes, we oboists are neurotic — but legitimately so.

“Our instruments are more finicky. We need to sound awesome despite all the things that are going on beneath the surface.”

It’s those concerns, explains principal timpanist Joe Pereira, that lead to the characterization.

“Oboists are commonly said to be neurotic because they’re always making reeds, always worried about the atmospheric conditions affecting those reeds, and because they wear earplugs and use black shields behind their heads,” he says, to guard against hearing damage from nearby, loud timpani.

“Of course,” Ghez responds, “other musicians have no idea how much time we spend making those reeds. Hours consumed doing just that — me at home at my reed desk — for, I can’t say how long. That’s why we’re high-strung.”

She says the not-so-high-strung string players have an easier time getting pitch right, that they can make on-the-spot adjustments. “For us, though, the reed is a big determiner of not just pitch, but all aspects of our sound.”

Ghez is hardly alone in that idea. Pereira also has to concern himself with many intricate practices to achieve his high performance standards, practices that, he says, do not go unappreciated by his fellow band members. “They say that they can depend on my pitch. That’s what I’m controlling when you see me bend down [ear to drum] to discern pitch, but there’s also worry about how it’s being affected by humidity.”

And because Pereira sits high on his perch at the back of the orchestra and looks quite kingly, his every move attracts attention. Still, he takes other musicians’ drubbings in good humor.

After the Philharmonic’s spring concert led by Herbert Blomstedt, Pereira stopped the conductor backstage to say how much he enjoyed playing under him.

“‘Yes, that was a very nice war you made back there,’ the visiting maestro told me,'” Pereira recalls with a smile.

Clearly, everyone is ready for a put-down. As protection, perhaps, section players do engage in self-mockery. And it seems none more so than violists, who, historically, used to step down from the more difficult violin as they aged, switching to the lower-voiced instrument that supposedly required less proficiency. With help from fellow musicians, they’ve filled whole pages with jokes:

What’s the difference between an onion and a viola? No one cries when you cut up a viola.

What’s the difference between a viola and a coffin? The coffin has the dead person on the inside.

How can you tell when a violist is playing out of tune? The bow is moving.

Retired violist Jerry Epstein recalls that former L.A. Phil director Zubin Mehta and a struggling violist had a secret pact (although everyone was on to it). When a difficult viola passage beckoned, Mehta would ask the elder string player to go open the stage door to let in some cool air or later, at the start of another tricky part, to go close it against a draft. That way the poor guy would be spared and the orchestra would sound better in his brief, crucial absence.

And now, even though violists are uniformly superb technicians, the underdog jokes still have free range. But the resident band’s principal bass Dennis Trembly says these gags are an even more apt fit for his instrument, the largest of the strings. For instance:

What’s the difference between violins and violas? One has more wood.

“That belongs precisely to the bass,” he says with a laugh.

But then there’s the French horn. No one makes fun of that player. “We all feel sorry for him,” says Epstein, who has seen many come and go.

“It’s like being an aerialist walking a high-wire — all exposed,” says Neil Kimel, hornist for the Chicago Lyric Opera Orchestra. “And we’re known for playing wrong notes,” adding that Mozart’s “The Musical Joke” was written in deliberately wrong notes. “Of course we try to fight the bad image by not making those bloopers.”

Where all these stereotypes get started and keep on going is easy to decipher, according to retired L.A. Phil violinist T.K. Wang. He belongs to a class of social commentators that sees orchestra personnel issues broadly.

“They’re all segregationist problems,” he says. “A factions fight. And making fun of our differences fits the times because orchestras can be seen like the U.S. government now, one side against another.”

He cites the brass section as the most politically conservative. “It was never on the side of peace and freedom,” he says, recalling that years ago the orchestra got together a petition supporting Amnesty International, to ask only that governments around the world protect music ensembles from repression.

“The brass would not sign it,” he says. “The irony was that the only nation that repressed orchestras was Russia” — which put the rabid anti-Communist musicians on the same side as the then-Soviet Union.

“Most musicians are liberals, except for the brass,” Wang adds. “The only guy from that section I ever knew to be other than arch-conservative was tuba player Roger Bobo.”

But trombonist Bob Weisman, who hails from the Hong Kong Symphony and says he holds progressive views, disputes that notion. “My close friends and colleagues, trumpeters, couldn’t be more humanistic in their outlook. True, musically the brass are assertive and loud, most of the time. That’s what makes us fearsome.”

Wang agrees: “We’re all afraid of them,” he says. “You know, they’re like SUVs compared to our little cars. They can blow us off the road.”

Whether because of differences in personal style or political stance there’s a bit of exaggeration that goes on in all these matters.

For instance, most players wear earplugs in order to protect their hearing. Epstein attests to the “two baskets backstage, one filled with plugs, one with cough drops” where all arm themselves before heading onstage. Ghez mentions custom plugs, molded to the wearer’s ear. She says all players put markings in the scores, to indicate when to insert them.

Trembly talks about needing plugs when he’s “near piccolos and their high piercing tones.” Pereira uses them when he’s “at ear level with timpani.”

And then there’s the issue of how individual orchestra members regard their roles.

“I think of percussion players as soloists,” Pereira says, “because mostly, it’s one at a time.”

“A percussionist making music with a hundred others is like stopping at a light in your car and waiting after it turns green to see what else is happening at the cross-section before you go, trying to gauge the rhythm and pitch.”

With all the seeming desire for section players to eye one another as combatants, even in good humor, they certainly live for bigger visions than that.

“In the end,” says Weisman, “we put all these little skirmishes aside and sit down together to make beautiful music. You can tell how true this is when a brass soloist gets a foot shuffle [applause] from the string players. That’s a celebration! One we live for.”