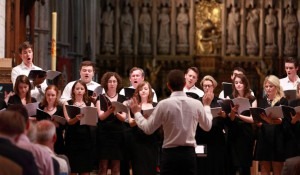 It’s Tuesday lunchtime at the Birmingham headquarters of Wragge Lawrence Graham, a law firm. But instead of heading out for errands or ignoring the lunch break altogether, solicitors and support staff gather – to sing. “The choir helps you get to know people at the company who you wouldn’t ordinarily meet,” explains Rob Bridgman, a young lawyer who conducts the three-year-old choir. “You meet people from other legal teams, the IT department, the business development department.”

Wragge’s London office has launched a choir of its own; the staff have opted for 8am rehearsals. “Music-making in the office gives people a chance to be themselves at work, and it doesn’t take time away from the family,” says Lorna Gavin, head of corporate responsibility.

Across town, meanwhile, software engineer Al Cutter takes regular breaks from his duties at Google’s Victoria office to jam with his funk band in the tech firm’s music room, which features state-of-the-art recording equipment, electric guitars and basses, a piano, drums and a voluminous library of sheet music.

“You need somewhere to relax and recharge your brain,” he says. Even though the room, located next to the lavishly stocked (and free) cafeteria and a ping-pong table, is open around the clock, there’s often a wait. That’s because a range of other bands, a cappella groups and assorted other staff – including a cellist and a “Russian opera singer dude” – use it, too.

Though Wragge and Google may lack any other similarities, they’ve both joined the booming trend of office music. London, long a choral capital, is setting the tone with law firms, banks, accountancy firms, tech firms, even cosmetics giant L’Oréal now featuring company-supported choirs. A number have set up Google-style music rooms, and some even offer music lessons during the workday.

“When we started 14 years ago, office music was an odd thing,” recalls Howard Charles, whose firm, City Music Services, helps corporations run choirs and provides conductors and instrumental teachers. “Today I hardly need to make a sell at all. It’s a huge shift. Companies are focusing a lot on staff engagement now, and music is relatively low-cost and brings a hugely diverse group of people together.” The Choir: Sing While You Work, a recent BBC television show in which conductor Gareth Malone helped offices launch choirs, has helped boost interest as well.

As a result, across London, office workers now get up from their desks to work their way through music sheets. Recently, musicians at Allen & Overy, another law firm, performed all of Beethoven’s symphonies in front of their co-workers over the course of a Saturday. On another occasion, the firm rented Glyndebourne opera house and performed an all-staff Magic Flute.

The lawyers and techies haven’t gone gaga. “Making music together stimulates one’s creativity and helps one’s self-confidence,” notes Mark Ford, director of knowledge management at Clifford Chance, a global law firm, which offers staff singing and piano lessons. “When you work long hours, it helps tremendously to take a break like this. You walk back to your desk refreshed.” “Anybody can participate,” says David Smith, business development director at the London law firm Outer Temple Chambers and founder of the law-firm choir competition Legal Harmony. “Whether you’re a receptionist or a CEO, if you can get away from work for 45 minutes and make music, that time is invaluable.”

According to research by Töres Theorell, professor emeritus of psychosocial medicine at Stockholm University and one of the world’s leading authorities on music and well-being, workplace singing in particular makes employees healthier, too. “Learning how to sing is a physical matter,” he explains. “It has a positive effect on the heart, and one’s lung capacity improves if one learns deep breathing [as practised by singers]. Deep breathing is useful even when one isn’t singing.” Singing, reports Thorell in Psychological Health Effects of Musical Experiences, published by Springer earlier this year, even has a positive impact on the hormones that help wounds heal faster.

In an age of declining group pursuits outside work – documented by Harvard sociologist Robert Putnam in his landmark study Bowling Alone – corporations perform a civic duty by bringing such pursuits into the workplace. Govaert admits that office music may not only be a force for good, given that new Googlers often spend every waking hour at the office, whether working, doing music or hanging out in the games room.

If other companies follow the lead of the famed HR innovator from Mountain View, the office may morph into an all-encompassing environment at the expense of the rest of society. Such ruminations though are not on the Wragge singers’ minds as they turn up for their lunchtime rehearsals: they’re more concerned about repeating their victory in this year’s Legal ­Harmony competition.