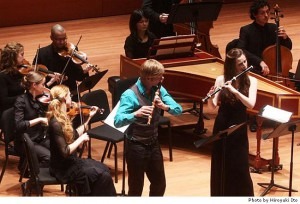 THE Juilliard School’s inviting 275-seat Paul Hall was nearly packed recently for an early-evening concert, a free 60-minute Liederabend program on which four gifted student singers, each paired with a comparably gifted pianist, sang songs by Schumann. Classical music has struggled for a long time to fight the perception — an unfair perception — that it is elitist and inaccessible. But here was a program that didn’t even require tickets. People just showed up.

There were plenty of fellow students and friends of the performers in the audience, but also lots of civilians, so to speak, music lovers who like to take advantage of a wonderful community resource. I overheard a regular at these free concerts tell a newcomer about the performances he had enjoyed so far this season, including two previous Liederabend concerts. During the school year at Juilliard, to look at just this one institution in New York, there are often two or three free events per day: chamber music, piano recitals, early-instrument ensembles, orchestra concerts.

As I listened to these students sing, I thought about the issues of economic inequality that the Occupy Wall Street protesters have moved to the center of political discourse. From the Medici family and Ludwig of Bavaria to Andrew Carnegie and David H. Koch, classical music, like other performing arts, has long depended on the 1 percent. Historically some of this generosity comes from people who simply support the arts they love; but some comes with strings attached. This dependence would seem to make the performing arts a natural focus for the Occupy activists. And twice recently protesters held rallies at Lincoln Center after opera productions.

One demonstration took place after the American premiere at Juilliard of the British composer Peter Maxwell Davies’s gripping new opera, “Kommilitonen!” It intercuts three stories based on actual events: the struggle of the civil rights pioneer James Meredith to become the first black student at the University of Mississippi; the work of some young Germans in the White Rose movement during the Nazi era who risked their lives to distribute pamphlets and fight propaganda; and the tale of siblings who get swept up in the Cultural Revolution in China and denounce their parents as politically impure. The other rally came at the Metropolitan Opera after the final performance this season of Philip Glass’s “Satyagraha,” his 1980 work that explores the life of Gandhi.

In each case it was easier to understand the issues that the Occupy Wall Street protesters care about than what policies they were seeking in relation to the arts.

I spoke with one thoughtful young woman at the rally after “Kommilitonen!” who said the protests were not really aimed at Juilliard. Here was an opera about seminal moments in the history of student activism, a work whose German title roughly translates as “Fellow Students,” but the main goal, this protester said, was to stir people to action, especially the performers and audience members. There were chants of “Off the stage, into the streets!”

At the rally after “Satyagraha” the protesters were ordered off Lincoln Center Plaza by the New York police and relegated to the sidewalk in front. That the Met was presenting an opera about Gandhi, a hero of civil disobedience, yet the activists were not allowed to protest in the plaza was galling to many participants.

I recently spoke with a pianist in the doctoral program at Juilliard, Ben Laude, who has been deeply involved with Occupy Wall Street. “Is Lincoln Center truly a site of free expression?” Mr. Laude asked. “Satyagraha” is a profound work that tells a timely story, he added. “I couldn’t imagine a historical figure more dedicated to a staunchly anticonsumerist stance.”

As a nonprofit private institution with a cultural and educational mission Lincoln Center does not permit demonstrations or passing out leaflets of any kind in the plaza, a policy upheld by United States Court of Appeals, which has designated it a “limited public forum,” said Eileen McMahon, a Lincoln Center spokeswoman.

On the night of the rally at “Satyagraha,” as the audience left the house, the police directed people to walk down the side exits of the plaza, to avoid the protesters.

A video taken by Alex Ross, a critic for The New Yorker, captured the scene, with protesters shouting to audience members: “The opera is your life!” “Your life is the opera!” “What would Gandhi do?” “Exercise your rights!” At the end Mr. Glass appeared at the protest and read the final lines of the libretto, taken from the Bhagavad-Gita. Protesters took turns speaking to the crowd that night. There were denunciations of Mr. Koch, the billionaire backer of right-wing causes who gave $100 million for the renovation of the New York State Theater, which now bears his name. And, echoing some of the slogans heard during the rally after “Kommilitonen!,” certain speakers at the “Satyagraha” demonstration made the familiar charge that the performing arts were elitist.

Mr. Laude emphasized to me that this issue is not central to the movement, and that at an open rally people are inevitably going to speak their minds.

Yes, the arts, especially in America, where government support is so paltry compared with Europe, have relied on backing from the wealthiest sliver of society. And, yes, top ticket prices at prestigious performing-arts institutions are out of reach for many among the 99 percent.

But as we try to grasp what the committed Occupy Wall Street activists are saying to the performing arts, can we all agree to put aside at last the charge of elitism? Especially, I would say from my partisan perspective, regarding classical music? At least in New York and in many other American cities, as well as most college towns, there are abundant opportunities to attend free or very affordable concerts and operas.

Just three days after that Schumann song recital at Juilliard, I was at another exhilarating free event there, Juilliard New Dances: Edition 2011, at the Peter Jay Sharp Theater. The program presented new works by four choreographers created for each of the four classes of dancers at Juilliard. That Sunday matinee was the fifth and final performance, and the place was packed. When I arrived, people were lined up outside hoping to get in.

The Manhattan School of Music, Mannes College and other educational institutions in New York have similarly full seasons of free and affordable events. True, premium parterre box seats at the Met go for more than $400. But premium seats at Broadway musicals are just as expensive. Upper balcony seats for that “Satyagraha” performance were $25, and from up there you can see and hear everything just fine. Also, the Met offers $20 rush tickets and free dress rehearsals for many new productions, not to mention the HD broadcasts around the world, which have turned the Met into the new people’s opera. At Juilliard tickets for “Kommilitonen!” were $15 to $30, and half-price for students — less than what you’d pay for a basic Yankees T-shirt, let alone a seat at a game.

For Mr. Laude and many other protesters the main issue regarding performing arts institutions is not inaccessibility but insularity. In other countries, he pointed out, the government and society work together to include arts directly in the lives of citizens. There is, for example, the exemplary youth orchestra training program El Sistema in Venezuela. And the public school system in Finland offers thorough music education as part of every student’s day. About 25 years ago, when Finland seemed to be producing more than its share of top composers and performers, the reason was obvious: You get what you pay for.

In recent decades other institutions have tried hard to rectify the historic problem of insularity. So many orchestras and ensembles in New York present youth concerts and sponsor special outreach programs for schoolchildren that my colleagues and I find it impossible to cover them all. Joseph W. Polisi, Juilliard’s president, offers “American Society and the Arts,” a course that gets students out of the practice rooms and into thinking about what they can bring to their communities.

Mr. Laude noted that the productions of “Kommilitonen!” and “Satyagraha” coincided with national protests by thousands of students over exorbitant tuition costs as well as rallies decrying economic inequality.

Mr. Laude said the Occupy Wall Street movement identifies with the activism that is central to these two works. What he specifically objected to was that the onstage activism was being packaged by a cultural institution in a “sanitized” way for “the consumption of operagoers who are able to attend.” The protesters were there, he explained, to prod artists and audiences into action.

It is inspiring to see idealistic young people finding common cause with art that grapples with political issues. And the analysis of economic injustice by the protesters could not be more timely.

Yet in a way the Liederabend recital at Juilliard was also a political statement, a kind of rally for humanity. To see fresh-faced, well-trained young artists singing Schumann with such involvement and dedication was deeply affecting. For the people around me, who took such pleasure in this free concert, here was another way to occupy Lincoln Center.