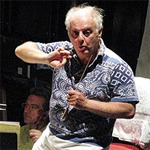 Maestro Daniel Barenboim believes people still have an interest in what he has to say after all these years. Ahead of his participation in Jerusalem International Chamber Music Festival, he discusses political situation’s effect on music, need for contemporary work, and conclusions from his 60-year career.


August 1950. Without being aware of it, Buenos Aires gets to mark a milestone in history with global debut of the person who would quickly turn into one of the world’s greatest pianists and conductors.

Maestro Daniel Barenboim is currently celebrating the 60th anniversary of his first performance on the concert stage in Argentina’s capital, while taking a sober look at the changed reality.

In a rare interview to Ynet, held several days before he returns to Jerusalem for the International Chamber Music Festival, founded and run by his wife – pianist Elana Bashkirova, he takes a break from his tight schedule and talks about music, the need for innovation, the danger of stagnation, and the Israeli occupation, which he says threatens the future existence of Israeli society.

At the Jerusalem festival he plans to perform an Israeli debut of two musical works by composer Pierre Boulez.

“The festival is celebrating its bar mitzvah this year, and this means it is leaving the childhood period and entering a period of adulthood,” he says. “This is why it was very important for me to perform key works from the contemporary musical repertoire.”

The presence of contemporary pieces in Barenboim concerts and in the festival’s program is not unusual. This is the production’s elegant way to expand the existing range of audience in the island of concerts and musicians, who take part in them as one.

“The first time I performed in a concert in Israel was in 1953,” Barenboim says. “It’s a long time. I have been in tight contact with the Israeli Philharmonic Orchestra for almost 60 years. In fact, it’s my main musical connection to the State of Israel. I have witnessed all the developments.

“In 1953, the Israeli Philharmonic Orchestra was a pure European center and that’s the way it rang too, as it had musicians from Germany, Poland, Hungary and central Europe. After the 1970s, with the Russian immigration, a significant change was made in the music playing style.”

According to Barenboim, musical life in Israel has also gone through various transitions. One of the less positive aspects, which he believes is the result of the changes in the Israeli society, is conservatism in audience’s musical taste.

“I believe that not enough emphasis is given in the education, both of the musicians and of the audience, to contemporary music,” the maestro says. “I know Zubin Mehta has included many new and contemporary pieces in the repertoire, but usually, the programs of concerts in Israel are very conservative. French music, for example, is not as appealing to the Israeli audience. That’s why when I take part in a festival in Jerusalem, I try to present new pieces alongside the familiar ones.”

This isn’t the first time Barenboim will be performing Boulez’s work in Jerusalem. Several years ago, he conducted the French composer’s ” Memoriale,” and this time he’ll present “Derive,” which he defines as one of the most important pieces composed in the past 30 years.

“It’s a symphonic creation for 11 players, including stringed, wind and percussion instruments. It’s a huge composition, not just in its length and importance, but in showing music’s connection to the past, present and future,” he says, stressing that “this isn’t just another new piece being debuted in Israel, and I hope people arrive at the concert curious and open-minded. It will be unique.”

Despite his tight schedule, every year in October, Barenboim clears a few days to take part in the festival, which is attended by leading international musicians, for free.

“The volunteering part is not the only important thing,” he stresses. “It’s the serious and deep work taking place here. It’s hard to build a program for chamber music, because in this field there are usually fixed ensembles which play together, and here you are required to connect between different people, and this could lead to lack of uniformity. On the other hand, these initial connections bring along new impulses, and I think the festival moves between these two ends.”

It’s easy to detect Barenboim’s methodic line throughout the years in his musical repertoire choices, which seek to develop tolerance, break the familiar boundaries and release the audience’s thought from the fixed norms.

He jokes about this thesis for a moment, and then says in a serious tone, “After all these years, people are still interested in listening to what I have to play, conduct and say. I think it’s not just my right, but also my duty, to convey to the audience and to new musicians everything I have learned and done over the years.

“It’s very important for me to remove contemporary music from the ghetto it has been trapped in. Once it was perceived as a movement directed at experts and knowledgeable people, but I believe it must be part of daily musical life.”

For many years you were Israel’s representative in the world of music. Today, much thanks to you, there is a selected Israeli representation in every esteemed orchestra in Europe. What does that say about us?

“It’s no secret that Jews have been known for their musical talent for hundreds of years. Jews have always played an important role in musical life with people like Arthur Rubinstein, Vladimir Horowitz, Leonard Bernstein, Yehudi Menuhin, Isaac Stern, and others. So it’s only natural that after more than 60 years of the State’s existence, it would produce a large number of Jewish musicians.”

Although we have significant musical powers in Israel, there is a glass ceiling which makes many of them leave. Why does this happen?

“I don’t know. I don’t spend enough time in Israel and I’m not familiar enough with the mechanism and level to express my opinion. In my modest way I have tried to lend a hand and help Jewish and non-Jewish musicians who came from Israel, like Salim Abud Ashkar from Nazareth and pianist Bishara Haroni, who is extraordinary. At the Berlin opera I had several assistants who grew up in Israel. I did what I could.”

Europe is filled with hundreds of gifted Israeli musicians, while here there has been a certain feeling of stagnation for quite a while.

“Yes, because we’re talking about the Israeli society after all, and we can’t escape it. It’s impossible for an occupation of 43 years not to have an effect on the quality of life in the country. People often fail to notice this, but it’s obvious that these things are connected.

“A soldier who served in the IDF before 1967 has had completely different experiences than soldiers who sat at roadblocks and saw all these things. I don’t think one can ever avoid looking at things from an ethical point of view, and this affects musical life as well.”

This doesn’t explain the feeling of stagnation, while veteran orchestras in Europe and the United States are leaping forward.

“Because it’s as if we just have to live day by day. We don’t look forward and don’t ask ourselves where we’ll be in 20, 30 or 50 years from now. The moment you live life this way, you only live with the things you are familiar with. It’s not living out of strategic thinking, but rather tactical thinking.”

Barenboim refuses to dwell on what would happen if the young and enthusiastic Israeli blood in Paris, Berlin and Europe’s Baroque orchestras would be in Israel, flooding the local music scene with adrenaline.

“Many Israeli musicians leave because they don’t like living here and because they have more options to advance on the outside,” he says. “We must understand that our situation is not just a political problem but a human one. We must learn to live together with the Palestinians or divide the territory, but closing ourselves in a ghetto will not lead us to the development of musical life, intellectual life, or anything else. It’s unfortunate, but that’s how I feel.”

At the moment you are performing with the Divan Orchestra in Argentina, and I was wondering whether you view the place you conduct in – be it Buenos Aires, Berlin or Jerusalem – as an emotional challenge?

“Naturally, I feel very emotional when it comes to Argentina. I was born there and grew up there until the age of nine. I have learned a lot from the Argentinean society, which has taken in people from the outside, Jews and non-Jews, from Europe and the Orient.

“There is a big Turkish community there, two Syrian communities, a Jewish and Arab community and communities of immigrants from Europe. In Argentina I learned that you don’t have to be just one thing, that there is such a thing as a multiple identity and it’s something that has remained within me.

“There are many things that are not right in Argentina, there is corruption and deep political problems. But tolerance is a natural element in the Argentinean society, and I have learned that there. As for the conducting experience, it’s related to music and does not depend on the place.”

In the past you seemed to be fighting for Israel’s character from the inside, but now it appears that you’re fighting from the outside. Have you given up on Israel?

“Let’s just say I’m afraid we’re not looking at the future clearly. Like philosopher Baruch Spinoza said, ‘Don’t weep or laugh, but understand.’ I think we are asking ourselves too little about where we are going and what we understand from all of this. It’s an illusion to think that as long as we close off and set borders, no one will hurt us. It’s a deep strategic mistake.”