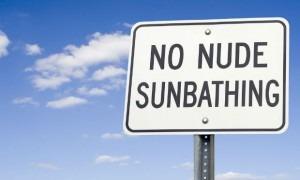 This article is being written on what is being described in the media as the coldest night in 20 years. The Huffington Post has a screaming headline in ice-blue print:

And yet the subject at hand is one that is like a midsummer night’s dream. In 2012 I did an article called “Nudity for Opera Buffs” that got a rise out of certain readers. While some said there was no place for naked performers on the stage and others thought we should have even more than we do, the general consensus was that nudity was acceptable when it was appropriate for the telling of the story.

I must confess that it never occurred to me that the subject of nudity at the opera would relate to anything apart from what happens onstage. That was until I came across some comments on the website of Opera Frankfurt, which I will soon visit. It seems that some audience members would like to attend a performance in the nude. I should note that, even though this opera company is German, those who participated in this discussion (from the summer of 2010) were not.

Here is part of the thread:

“I too am interested in the dress code. Since last writing I have become a naturist and wonder if the Opera Frankfurt had thought of putting on a special performance for this growing band of opera lovers who have no dress code.”

“There is a lot to be said about listening to music whilst unattired. In this beautiful summer we have here, perhaps Glyndebourne could persuade its members (sic) to have a naturist day? Perhaps fellow subscribers could suggest music to be played?”

“Percival – the problem would then be that the orchestra, soloists and chorus would feel obliged to perform in the buff. These would, in turn, be a distraction for the hard-working technicians and could create a health and safety issue. As far as the public is concerned there is a very real risk of dangly bits getting caught in the folding seats, with ensuing litigation implications.”

In a more recent posting on this thread, someone asked about renting opera glasses. This was the official response from the opera company: “Unfortunately, for hygienic reasons, we have no opera glasses on hire.” If sharing binoculars is deemed unhygienic, I don’t think we will be seeing any group sales to nudists at Opera Frankfurt.

But we are living in straitened times, and often gimmicky ones, in which impresarios are trying to find ways to sell tickets to opera and other performing arts. Because the opera company in Germany’s financial capital was named the world’s best in the 2013 International Opera Awards, they should not have trouble getting Frankfurters in the seats. But that might not be the case elsewhere, even if what would be in the seats are buns.

I have seen many opera companies do events that package performance tickets with lectures and receptions in which people with common interests are brought together. It is a good way to build a mailing list and target marketing. A few years ago, I was engaged by the Met to give a pre-opera talk to single heterosexuals (La Bohéme) one evening and to gays and lesbians (Jenufa, don’t ask me why…) on another. These events drew good attendance and I am sure some of them became regular operagoers. I would have no objection to addressing a naked audience as long as I can be clothed or at least have a very large lectern.

So, if there is a potential for audience development among naturists, should arts organizations throw caution (and not only) to the wind and make accommodations on special occasions? At the very least, I think some kind of sanitary precautions should be taken, with towels or some other sort of protection placed on seats. Perhaps a part of the cost for the ticket should be a souvenir beach towel with the name and logo of the opera company on it.

I also think that a budget line would have to be created to pay for ushers and other employees who are unwilling to work on a night with an audience full of opera nudists. The fact is that, while there are many pleasurable and positive things to be said for living one’s life in the altogether, it is not something everyone shares or wants to be witness to.

But, to address an aspect of this topic that all of us can explore, our sensory perception at performances happens not only with our eyes and ears. I am hardly the only concertgoer who slips his shoes off in concert halls and places his stockinged feet flat on the floor to feel the vibrations as an orchestra plays. It does enhance the experience. I see this all the time and I recommend it. I have seen plenty of bare feet too, though I have not done that.

I would imagine that it might be a bracing experience for an “unattired” person to experience music more fully when the entire surface of his or her skin is exposed to the vibrations that beautiful sound creates. If you want to try this at home while listening to WQXR, go ahead and see what it is like. Just wait until we are past the polar vortex.

As to special evenings for naturists in an opera house, please share your views, tongue in cheek and otherwise. Here is a question: If we were to contemplate operas we might want to listen to in the nude, whether in public or private, which ones would they be?