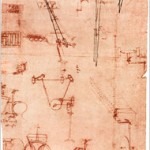 The problem with playing string quartets is you need four string players in a room. Leonardo da Vinci figured out a solution: a hybrid of a keyboard and bowed string instrument, a mythical beast like the griffin, part eagle and part lion.

The instrument, called a clavi-viola in Italian or harpsichord-viola in English, has emerged from myth into Times Square. A realized version went on display Thursday at the exhibition “Leonardo da Vinci’s Workshop,” which is running at the Discovery Times Square Exposition. The exhibition opened last month but the clavi-viola arrived late.

“We are in front of a completely unknown instrument,” said Edoardo Zanon, who worked on creating the instrument based on the artist and inventor’s sketches. Unlike many of Leonardo’s designs for machines, which improved on existing technology, “It was his own invention,” Mr. Zanon said. Leonardo was seeking to combine the sustained notes of string instruments with the capacity for one musician to play simultaneously moving lines and chords.

Mr. Zanon and the Renaissance music band Piffaro gave a demonstration before a brief concert at the exhibition space. They played a popular 16th-century tune, “Tiente Alora,” with the clavi-viola sounding out a simple line. The mechanics of the machinery needed to operate the instrument were loud, but a sweetly moaning string sound emerged from the triangulate box with a keyboard on top.

Massimiliano Lisa, an associate of Mr. Zanon’s, pumped a lever back and forth to turn a wheel inside the box that propelled a strap of cotton material — the “bow” — continuously around pulleys. When Mr. Zanon pressed a key, a string would push forward against the moving strap, creating sound.

The three-octave instrument has a leather harness so it can be attached to the player’s body. The lever attaches to a leg, and moves back and forth as the player walks, propelling the mechanism. The system both frees both hands to play and presumably allowed participation in court processionals.

Mr. Zanon and Mr. Lisa are founders of Leonardo3, a Milan-based company that realizes Leonardo’s designs for exhibit and publication.

This instrument is the first working version, based on a Leonardo3 prototype. A future version will have a “bow” made of horsehair, creating more volume.

Within a year, Leonardo3 hopes to have an electrically powered version that will eliminate the mechanical noise.

Along with visions of flying machines, machine guns and bridges, Leonardo’s inventive fecundity included numerous designs for musical instruments, including a self-playing drum on a carriage pulled by a horse and a flute that changes pitch with a slide instead of holes.

The clavi-viola design is contained in the Codex Atlanticus, the largest collection extant of Leonardo’s drawings and writings, which is held by the Ambrosiana Library in Milan. The design exists on only half of the sheet of paper used by Leonardo; the left side was lost. Critical information is missing because sketches break off in the middle.

Leonardo3 is confident that such an instrument was never built in the inventor’s day. If it had, imagine what Vivaldi or Scarlatti or Handel might have written for it? Mr. Zanon said several composers in Italy are already interested in trying their hand at a work for the clavi-viola.