Media
Not Quite a Horse Race
May 10th, 2013
Tags: miscellaneous 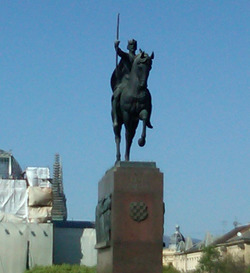 Probably the only time I think very much about horses is when I see an equestrian statue, like this one in Zagreb, Croatia, yet even I know about the Kentucky Derby.

Every year on the first Saturday in May since 1875, the eyes of the world are on the state of Kentucky for approximately two minutes to find out which jockey will capture the coveted first prize (and the lion’s share of the now $2,000,000 purse) in the Kentucky Derby.

Exactly 110 years later, another extremely high-stakes prize was established in the bluegrass state, though it has yet to garner the same amount of attention from the general public—the $100K University of Louisville Grawemeyer Award for Music Composition. While regrettably there are fewer fans of contemporary music than sports of any kind in this country or probably anywhere else in the world, the Grawemeyer has also yet to be as widely an acknowledged accolade—even among new music aficionados—as other honors like the annual Pulitzer Prize.

Yet until last year, when the award was reduced from $200K to $100K as a result of the fund for the prize losing money due to a drop in the stock market, the Grawemeyer was double the size of the second largest prize a composer could receive. But since that prize, the Northwestern University School of Music’s Nemmers Prize (first awarded in 2004), as well as Sweden’s Polar Music Prize (established in 1989 by ABBA manager Stig Anderson), is also $100K, there still is no larger award. The Pulitzer, at $10K, is merely one tenth the size. The Grawemeyer, Nemmers, and Polar Prizes are open to composers from anywhere in the world (the Polar Prize is actually open to all genres as well), whereas the Pulitzer is exclusively the domain of Americans. However, since Pulitzer prizes are also awarded for journalism, every newspaper in the United States covers them faithfully every year. Did your morning newspaper (those of you who still read such things) run a story on the Grawemeyer Award this morning?

Might the Grawemeyer also not have the same caché as the Pulitzer because of the way the awards are determined? Each Pulitzer Prize winner is determined by a jury comprising a group of experts (which always includes a previous recipient of said award) which chooses three works to submit to the Pulitzer’s board (comprised mostly of professional journalists) which then makes the final selection. The Grawemeyer, on the other hand, is determined by a total of three panels. The first is culled from University of Louisville faculty and the second is a group of music professionals, including composers who have previously received the award. But the final panel, and the one ultimately selecting the winner, is a lay committee of amateurs which, according to the University of Louisville’s website, philanthropist Charles Grawemeyer believed would result in a more “democratic” adjudication process.

That more democratic process has resulted in an admittedly somewhat odd list of works. To date, only one piece of chamber music has ever been awarded (Sebastian Currier’s Static in 2007) and the only other winning work thus far that did not involve an orchestra was the collection of Piano Etudes by Gyorgy Ligeti which captured the second prize in award’s history, back in 1986. There also seems to be a weird proclivity for choosing string concertos. This year’s winner, Michel van der Aa’s Up-close is the 10th such work out of a total of 27 winners, which is more than 1/3rd of the total. However, the fact that Up-close also employs multimedia (it is the first Grawemeyer Award-winning instrumental composition to do so) is a hopeful sign that a greater range of works might snag the award in years to come.

Still, might a panel of “experts” be ultimately more sensitive to ensuring a greater variety from year to year than a panel of “amateurs”? I could imagine a group of such experts opining, “We can’t give this award to yet another violin concerto. Aren’t there any other worthy pieces in the submissions pile?” Of course, these days it sometimes feels a bit nostalgic to ponder the viability of expert opinions. After all, crowd-sourced decisions, a step even further beyond lay panels, have been touted as the unstoppable wave of the future by all the most trusted crystal ball toting spin doctors on the web. (Wait a minute, aren’t those spin doctors “experts”?) And yet Oscars, Emmys, and Grammys still have more cultural clout than the People’s Choice Awards. But maybe that will change as fewer and fewer people receive their news from mainstream media outlets. Sadly, though, the avenues of information that now inform many people about what’s going on (e.g. Twitter feeds, Facebook postings, even websites such as this) are so targeted that it can be extremely difficult for news to reach beyond the folks who have a vested interest in it. So, ironically, even though the Grawemeyer Award might be more reflective of what the greater community believes to be the strongest piece of new music, the result of this award will have a harder time reaching people who are not connected to new music in some way. And until the music awarded these kinds of accolades can reach a greater percentage of the population, it won’t really be culturally relevant.

Even if you don’t care about horse races (I know I don’t), I’m sure you’ve heard of the Derby. Without needing to turn on a TV or a radio, I always know when it’s Derby time from various posts from some composerly friend on Facebook. But if you weren’t somehow involved in new music, would you be friends with someone who posted something about the Grawemeyer Award? Thankfully I’m not a gambler, but if I was I’d be willing to bet the whole purse on what the answer would be. It’s hardly a horse race.