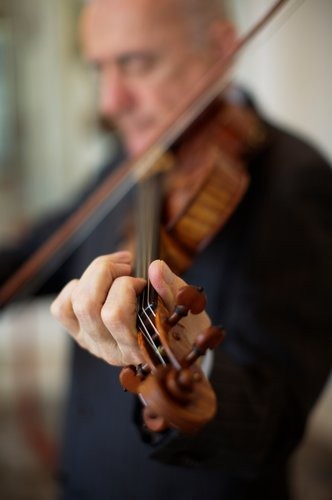 IN a dimly lighted hotel room, violinists blinking through vision-obscuring welder’s goggles picked up six violins. One was a Guarnerius and two were Stradivariuses, among the most storied names in instrument making and considered the epitome of violins; three were modern. players were asked their preference. Only 8 of the 21 picked the precious products of the old masters, according to an academic article published this month.

It was the latest salvo in the Strad wars, a long-running debate over whether the enormous worth of such instruments is rooted in myth or merit.

The tradition of challenging the intrinsic musical worth of antique instruments is nearly as venerable as the instruments themselves. Science has advanced, with ever better methods of analysis. Makers have leapt ahead in producing superb instruments, which have gained a foothold among many serious players.

But while the mystique faces ever-greater scrutiny, it remains powerful in our increasingly digitized and disposable world, where 300-year-old wood objects used to express deep emotion seem ever more precious. Prices continue to soar, and musicians still yearn to play old master instruments.

The latest to get one is Stéphane Tétreault, an 18-year-old Montrealer who is being loaned the 1707 Countess of Stainlein Stradivarius cello that belonged to Bernard Greenhouse, a founding member of the Beaux Arts Trio, who died last May. The Greenhouse family sold the instrument two weeks ago to an anonymous patron in Montreal for an undisclosed amount, but one said to surpass the previous record of $6 million.

The Strad wars won’t end soon, and soaring prices for the 2,000 made during the golden age of mid-16th to mid-18th-century northern Italy have intensified the stakes. The pool of talented string players is growing. The number of Strads and Guarnerius del Gesùs and Amatis and Bergonzis is not.

By contrast, mechanical instruments like clarinets and flutes tend to wear out; even pianos, with their complicated action and the tendency of their flat soundboards to warp, have lives usually measured only in decades, not centuries.

Broadly speaking, consider the divide in the string world to be between the True Believers and the Debunkers.

On the true believer side are collectors, dealers and superstar players who perform on the valuable instruments. All have an interest in maintaining the reputation of these instruments, as a source of both wealth and prestige.

Several factors put old Italian instruments on top. Superb wood, perfected design, the highest craftsmanship and special varnish all came together in Cremona and its environs from 1550 to 1750. The sheer number of years being played is a factor. Repeated vibrations have an effect on the wood’s structure, causing cells to break down in a way that produces a more flexible sound, some violin experts say. “By playing an instrument, it opens up its pores,” said the violinist and conductor Pinchas Zukerman, who plays a 1742 Guarnerius del Gesù. “The voice becomes purer and brighter.”

Like many violin experts, Mr. Zukerman cautions that some Strads are better than others. What matters is the connection. “When an instrument suits a player, my God, it’s a match in heaven,” he said. “When I play on Perlman’s violin I sound like garbage,” he said of Itzhak Perlman’s Strad. “He plays it, and it sounds like a million bucks.”

Psychology plays an important role. If musicians think they are playing one of the greatest instruments in the world, one that served virtuosos before them, they may actually play better.

“A great violinist can make almost any violin sound really good,” said Christopher Reuning, the Boston-based dealer who brokered the Greenhouse sale. “When they are playing a great Strad they have an ease.” It allows them to “sculpt the sound” and produce different emotions with the slightest change of bow speed, he added.

The equipment adds to the performer’s luster. Programs sometimes list the name and date of a violinist’s instrument.

The debunkers include scientists, modern luthiers and some younger soloists who can’t afford old master instruments and make a virtue of the new.

“Classifying violins into old and new doesn’t really make any sense, except for the history of design and antique value,” said Claudia Fritz, a flutist and the researcher at the Université Pierre et Marie Curie in Paris who conducted the blind performance study that was published in The Proceedings of the National Academy of Sciences on Jan. 2. “I don’t think there is any objective difference,” said Ms. Fritz.

Sam Zygmuntowicz is one of the nation’s most prominent violin makers. He lives in Park Slope, Brooklyn, and his new fiddles go for $55,000. An older instrument recently sold for $130,000 at auction. “Don’t ask the question ‘What makes a Strad great?’ ” he said. “Ask the question ‘What are the attributes of great violins, and what makes this violin different than another?’ ”

“The thing about believers is they just believe,” he said. “For those who are privileged enough to be selling them or own them or buy them, there’s no incentive to disbelieve it.”

The debunkers make another point. The Strad mystique can put enormous pressure on performers to play on a rare named instrument and devalues musicians who don’t.

“This is all I heard when I was growing up,” said Nadja Salerno-Sonnenberg, the international soloist. “ ‘You need a great old violin,’ ” she said. “It was drummed into my head.” She felt it so keenly that in her 20s, when she gained the use of a Strad that was too large for her, she kept on playing despite suffering tendinitis.

After two seasons, the wealthy couple who had loaned it to her decided to divorce and recalled the instrument. “In hindsight, it turned out for me to be a blessing because I was ruining my arm,” she said. Ms. Salerno-Sonnenberg now plays a much more comfortable Peter Guarnerius of 1721.

The stratospheric costs of rare instruments mean that many players must rely on loans from wealthy patrons, a situation that can sap an artist’s dignity and cause disruptions in their lives.

Dylana Jenson was a rising star in the late 1970s and early 1980s. After winning a silver medal at the International Tchaikovsky Competition in Moscow at 17, she was loaned a Guarnerius del Gesù. Six years later, when she decided to marry, the patron took the instrument back, saying she was not committed to her career, according to Ms. Jenson. Her career fell into a tailspin.

“It was an intimate part of my ability to express myself as an artist,” she said of the violin. “Then I had nothing.” She now plays a Zygmuntowicz instrument.

Leila Josefowicz, another prominent soloist, is also talking to Mr. Zygmuntowicz about a purchase. She lost a Guarnerius del Gesù when the lender decided he wanted to sell it. She replaced it with another precious instrument, but its owner recently died and she now faces uncertainty over whether she can keep that one. She acknowledged the awkwardness of being subject to a patron’s whims. “You have to come play for them when they want,” she said. “That’s a small sacrifice to play a great instrument.”

She said she does not want to be perceived as a victim of donor capriciousness. “The sound comes from the player,” she said, noting that modern makers have come “extremely close” to matching the quality of top Strads. She also plays much modern music, so a newer instrument is more appropriate. But she added, “I don’t know anyone who would say, ‘No, thank you,’ ” to a Strad.