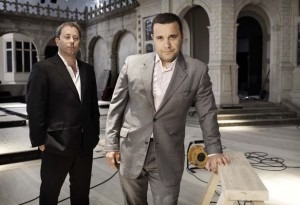 The men behind the rise and rise of Opera Holland Park are proud of their diverse repertoire – and their diverse audience. Anna Picard reports.

It’s mid-afternoon on a balmy spring day and I am enjoying a guided tour from Michael Volpe, general manager of Opera Holland Park in west London. The tour is not of the theatre, nor of this season’s programme, but of Volpe’s tattoos.

“The fish means knowledge,” he tells me, pointing to a multi-coloured Japanese carp that curls plumply around a quotation from L’amore dei tre re. On his other arm, the oak leaf and olive branch of unified Italy look down on a line from La fanciulla del West. There’s no doubting Volpe’s love of Italian opera. Meanwhile producer James Clutton, who has no tattoos, is fine-tuning a rehearsal schedule that will see him dash between studios in Kennington, Pimlico, Lambeth and Hammersmith, overseeing six new productions of operas by Donizetti, Mozart, Verdi, Puccini, Mascagni and Catalani.

OHP has enjoyed a steady upward trajectory over the past decade, combining quirky productions of core repertoire with rarely staged works such as Cilea’s L’Arlesiana, Zandonai’s Francesca da Rimini and Mascagni’s Iris. It was here that Rosalind Plowright reinvented herself as a mezzo-soprano, here that Amanda Echalaz made her breakthrough in Stephen Barlow’s production of Tosca, and here, too, that conductor Stuart Stratford made the leap from Tête à Tête shorts to Tchaikovsky. And while English National Opera turned to cinema and musical comedy for new directorial talent, OHP sought out Barlow, Annilese Miskimmon, Olivia Fuchs, John Fulljames and, this year, Liam Steel.

The company is unique: partly funded by the Royal Borough of Kensington and Chelsea, handsomely supported by its Friends scheme, newly sponsored by Investec Wealth and Investment, and trimmed to a production budget a fraction of those of Glyndebourne, Garsington and Grange Park. Set in the greenery of the park, just a few minutes from the Tube, it is both part of the London opera scene and part of the champagne picnic circuit. As Volpe puts it, “the only thing you might feel uncomfortable wearing is black tie”. Patrons can bring picnics but there is no long dinner interval. As Clutton says: “We’re not a catering company.”

Their audience is diverse, reflecting the make-up of a borough that, for all its multimillion-pound white stucco terraces, was the setting for Kidulthood. Along with 1,200 free tickets for children aged nine to 18, OHP provides discounted tickets for council workers and their families. Last year’s outdoor production of Fantastic Mr Fox (tickets for £2.50) was an instant hit with the Boden set. But for Clutton, the company’s work with elderly residents in the borough’s care homes is as rewarding as its education projects. The wisdom of age is valued professionally too. Veteran bel canto conductor Richard Bonynge opens this year’s festival with Don Pasquale.

It’s a far cry from the amateur productions of Aida “with tea-towels for head-dresses” that used to appear when Volpe, who left school at 16 and first worked as a hairdresser, took a marketing job with the council. In 1996, he persuaded Kensington & Chelsea to form its own production company, but it was not until Clutton joined from Bill Kenwright Ltd and brought West End discipline to summer opera that the company found its stride. Today, Clutton and Volpe are more than the public faces of Opera Holland Park. They are Opera Holland Park.

Both are “ordinary working-class boys”. Volpe grew up in Fulham on a diet of verismo arias and Neapolitan songs, Tottenham-born Clutton was “raised on the holy trinity of Sinatra, the Beatles and Ella Fitzgerald”. They are, it’s fair to say, infuriated by perceptions of opera as elitist. While Volpe tells me about bringing a group of Chelsea fans to La traviata (“a sea of shaven heads!”), Clutton riffs irritably about Alfie Boe’s description of the Royal Opera House as snooty (“that’s not been my experience”). There’s a certain tetchiness between them, offset by grudging, blokeish affection. Though their roles are distinct – with Volpe responsible for sponsorship, press and marketing, and Clutton responsible for the casting and organisation of each year’s run of nearly 50 performances – the programmes are devised “50/50”, often over a bottle of wine. With no music director, the choice of repertoire is theirs alone.

From 7 June to 13 August, come rain or shine, you can see Volpe in his al fresco “office” at the top of the steps to the theatre. Don’t expect to see the Japanese carp though. The tattoos will be covered with a sharp suit, while Clutton will be backstage checking that all is well, after a nightly ritual that involves shaking the hand of the leader of the City of London Sinfonia and other key members of the orchestra before each performance. This year, there are high hopes for Liam Steel’s debut production of The Marriage of Figaro, Anna Leese’s Suzel in Miskimmon’s staging of L’amico Fritz, and Gweneth-Ann Jeffers’s return in La Wally, an opera best known for its avalanche scene.

So how will they stage an avalanche in high summer? No one’s saying. Though Clutton feels failure keenly if a production doesn’t fly, OHP has enjoyed more hits than misses. The secret, he says, is to forge new teams of directors, conductors and designers, rather than work with pre-existing teams. A self-confessed control-freak, he is also deeply superstitious. But if you found a Queen of Spades playing card on the pavement on your way to borrow a tenor from Valery Gergiev’s Mariinsky Opera after your Germont had “imploded” in Tchaikovsky’s gambling opera, you’d be superstitious too. Gergiev obliged and the show went on. As it always does.