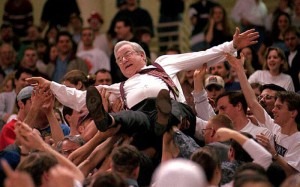 Two years ago a respected scientist and artistic director of the Bristol Old Vic was thrown out of a concert for attempting to crowd-surf. The show was part of an “accessible and informal” classical music concert.

According to the Independent, the Royal Society Research Fellow was so moved by the ‘Hallelujah Chorus’ that he began physically rocking back and forth and raised his hands above his head. Calling out during the music, and then attempted to crowd-surf, prompting angry audience members to physically remove him from the concert hall.

While this is an extreme example, the concert etiquette at classical music performances can be a stifling experience for newbies attending symphony concerts. Whether it’s the anxiety about when to clap or what to wear, the fact is, none of these things have anything to do with the enjoyment of music. Full story.