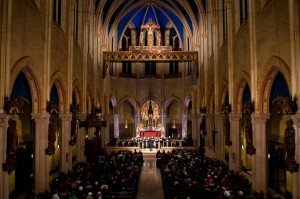 The Tallis Scholars performing at the Church of St. Mary the Virgin in Manhattan. Credit Karsten Moran for The New York Times

Nico Muhly is a composer whose work has included collaborations with Björk and the choreographer Benjamin Millepied. His opera “Two Boys” was produced in 2013 by the Metropolitan Opera, which will present his “Marnie” in the 2018-19 season.